#141
Bill and Dorothy McClure, dairy farmers in the early 60's in Smithfield, TX (just north of Ft Worth). Why would we highlight the McClure's? Well it was their dairy farm that became Green Valley Raceway, a multi use drag strip/road course that survived over 20 years before falling to the growth of the metroplex. Green Valley held many AHRA major events, then switching to NHRA an...d hosting divisional meets. The 1.6 mile road course was a popular stomping ground for Texan Carroll Shelby along with other greats like Parnelli Jones, Dan Gurney among many others. Green Valley was also the site of an Evel Knievel motorcycle jump over eleven Mack trucks in 1974 that was televised on Wide World of Sports with Howard Cosell as the TV host. The McClure's ran the track for several years before selling to Texas racer Bill Hielscher who would operate the facility until it closed in 1986. Today the track that the McClure's started is a housing development, with no sign of a race track left. Smithfield was absorbed by North Richland Hills but perhaps late at night you might hear the ghostly echo of a fueler blasting down the once famous quarter mile.
From Don Cook. 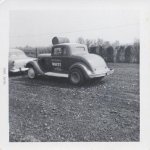 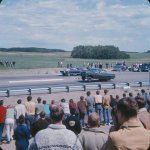 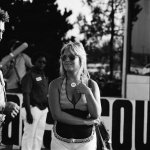 #153
A selection from the A/Competition class at St.Thomas Dragway in 1966. Here we see local racers The Kemp Brothers coupe from Thorndale Ontario, the Dury Brothers and Doug Kennington. When racing was still reasonably affordable, although many from back in the day will argue that it was damn expensive back then as well. 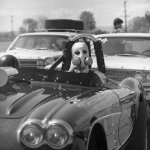 #156
In the early 60's the east coast racing was indoors, at the International Amphitheater......can't imagine racing between those doors......cool pics I found on the net