#1
There used to be a thread on Sunbeam Tigers, but it seems to have disappeared after the big crash. Lets get it back on track, 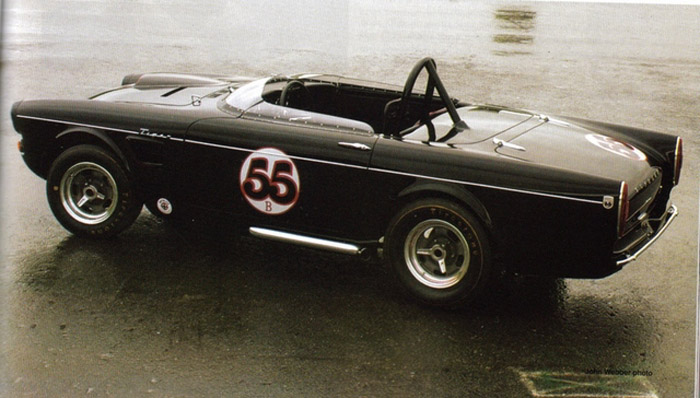 ​
There are those in the hot rod scene who don’t know Doane Spencer was a road race guy. Likewise, there are those in the road race scene who don’t know he was also a hot rodder.​
​
Doane Spencer enjoyed two distinct phases in a lifetime building cars. And several of his cars have become influential in many ways. In the early 1940s, when Doane was a teenager, he did some work on a full-fendered 1932 Ford Roadster hot rod, owned by a classmate of his, Jack Dorn. The work included filling the grille shell and adding a stunning Du Vall windshield. In 1944, Spencer purchased the ’32 off Dorn and set about rebuilding it to his own tastes, removing the fenders, and repainting it black (it was originally maroon).​
​
At the time, Spencer was knocking around with other young hot rodders such as Wally Parks, Robert E. Petersen, and Alex Xydias, guys who would all play significant rolls over the coming years in the growth and main stream acceptance of hot rodding.​
​
Spencers beautiful ’32 Roadster would go on to become one of the most influential hot rods ever built, and many of the modifications he made to the car are still copied today. He raced it on the dry lakes, running 126.76mph at El Mirage, yet the car also won show awards, including Best Appealing Roadster at the Pasadena Roadster Club’s 1947 Reliability Run, and it was invited to be displayed at the first SCTA Hot Rod Show in 1948.​
​
However, Spencer had other interests outside hot rodding. His fascination with road racing was evident at a young age. In the early ‘50s he tore the ’32 apart, and began rebuilding it so he could race it in La Carrera Panamericana. He rebuilt the suspension, ran the exhaust pipes out each side through the chassis rails for better ground clearance, installed a Hallibrand quick-change rear, Hallibrand magnesium wheels, and replaced the Flathead V8 with an OHV Lincoln motor. However, before the Roadster was finished, La Carrera Panamericana was cancelled.​
​
But for Spencer, the path was set. He became involved in the world of road racing, building and preparing race cars. His early hot rodding roots were evident in many of the cars he built, none more so than his 1956 Thunderbird, and 1965 Sunbeam Tiger.​
​
The Tiger deal came together during his time at Hollywood Sports Cars, when approached by Ian Garrard of Rootes Motors, who’d moved to the US in 1951, eventually becoming their West Coast manager. Garrard had approached Carroll Shelby about building and running a Tiger in B Production sports car races throughout 1964. With Lew Spencer at the wheel, the Shelby built Tiger enjoyed some success late in the year, but overall, Garrard was disappointed, so approached Spencer at Hollywood Sports Cars about building a new Tiger for the ’65 season.​
​
The Spencer Tiger was a work of art. Painted black, with the exhausts exiting each side through the sills, and with Hallibrand wheels, many of his hot rodding influences were evident. Spencer built the Tiger with 4-wheel disc brakes, a beautiful low Perspex windscreen that wrapped around each flank and along the doors, a driver roll-hoop in which the bodywork molded around the rear support bar. He removed anything in the engine bay that didn’t need to be there, and relocated it elsewhere within the car, and cut reverse louvres in the hood and ducts in the front guards to help cure the Tiger of its natural tendency to overheat.​
​
With just under 350hp extracted from its 260ci V8, the Spencer Tiger was said to be able to lift its front wheels on hard acceleration! With Jim Adams at the controls, it won first time out. The car was withdrawn at Candlestick Park after qualifying 1st equal with Phill Hill in Ken Miles 427 Cobra, after the track-bar bent. But Adams won the B Production sports car race at Mosport Park during the Mosport 200 event, and was 3rd behind Jerry Titus (Shelby GT350) and Merle Brenen (Jaguar E-Type) at the Pacific Coast Divisional Champs.​
​
The Tiger won the Santa Barbara Road Races, the Stockton Road Races, Great Salt Lake Road Races, Willow Springs, and the San Louis Obispo Road Races during the ’65 season, gaining a healthy points haul.​
​
However, mid-year, Adams broke his leg, and Spencer chose not to run the Tiger again until he was fit to race again, which was at the last race of the season at Daytona, for the American Road Race of Champions, where Adams was 4th fastest in qualifying behind a 427 Cobra and a pair of Shelby GT350s, but he was eliminated on the first lap by a spinning Corvette.​
​
Following Daytona, Garrard sold the Tiger to Ron Dykes, who raced it fleetingly throughout 1966, before its career came to an end.​
​
Of the handful of Anglo-American sports cars built during the ‘60s, the subtle Sunbeam Tiger is probably one of the more mild-mannered. But the Doane Spencer road race Tiger was definitely monster of a race car, and surely the toughest Tiger ever built.​

#3
Carroll Shelby, under a contract with Rootes Group of England, built the 1964 Sunbeam Tiger 289 prototype, a high-performance V8 version of the Sunbeam Alpine roadster. The production Tiger was very close to the prototype developed by Shelby American. This Tiger, with serial number B9470035, is one of seven competition “Works” Tigers built by Rootes to compete in international rallies. It was later modified specifically to run in the 1965 Targo Florio International FIA race in Sicily where it finished 2nd in class and 16th overall, driven by accomplished rally drivers Peter Harper and Reverend Rupert Jones.
Of the original seven competition rally Tigers, five exist today with the other four in England. This Tiger was imported into the U.S. in the late ‘90s, then restored and has been in vintage car shows such as the Quail Motorsports Gathering in Monterey, Calif., The Rocky Mountain Concours d’Elegance in Colorado Springs, and other events. 1964 Rootes Factory “Works” Rally Tiger, B9470035

Two major versions of the Tiger were built: the Series I (1964–67) was fitted with the 260 cu in (4.3 L) Ford V8; the Series II, of which only 633 were built in the final year of Tiger production, was fitted with the larger Ford 289 cubic-inch engine. Two prototype and extensively modified versions of the Series I competed in the 1964 24 Hours of Le Mans, but neither completed the race. Rootes also entered the Tiger in European rallies with some success, and for two years it was the American Hot Rod Association’s national record holder over a quarter-mile drag strip.
From https://shelbyamericancollection.org/cars/1964-rootes-works-rally-sunbeam-tiger/

#4
Winner: Jo Collins, Playmate of the Year 1964
Only 633 Sunbeam Tigers were built and they’re now considered very rare and desirable, so to have one given to you when they were brand new is insanely cool. Carroll Shelby loved stuffing V8s into small British sports cars, and this car is another example of that madness. Sometimes referred to as the poor man’s (or woman’s) Cobra, the Sunbeam Tiger was powered by a Ford 260-ci V8 engine and cost only $3,425.