#1
Hot Rods You Should Know: The California Kid’s 1934 Ford Coupe
By Lindsey Fisher Images: The Kansas City Star
Automotive movies have grown in leaps and bounds by way of advances in cinematography, stunt work and visual affects since the 1970s. Some of the most famous and influential automobiles in the hot rod industry still have ties to Hollywood that reach back far before high-definition televisions and Blu-Ray players. The 1934 Ford 3-window coupe featured in the 1974 made-for-TV movie The California Kid is one such car, and a fitting subject for this month’s “Hot Rods You Should Know” feature! Image: Wikipedia
The flamed 1934 Ford that starred alongside Martin Sheen in The California Kid is about one of the most iconic movie cars ever to have graced television screens. But the coupe was a note-worthy car even before movie producers got their hands on it.

In 1973, the two friends received one of the greatest honors ever bestowed on hot rodders even to this day — their cars were both featured on the November cover of Rod & Custom magazine. It was on this magazine cover that television producer Howie Horowitz saw Chapouris’s car and immediately knew he had found the perfect hot rod for his already scripted, upcoming television movie, The California Kid. As they say, the rest is history!

Bought by Chapouris with the roof already chopped, the 1934 coupe was fitted with a classic 302ci Ford V8 and an FMX gearbox by the traditional hot rod enthusiast. Other features like a quick-change rearend, Halibrand wheels and the iconic flame job by Manuel Reyes all played into the car’s traditional feel, an appealing yet, considered by some to be an outdated attribute of the build.

With the car’s starring role in The California Kid (as well as the release of the movie American Graffiti the same year), this way of thinking changed, with traditional-style builds once again becoming popular in the hot rod industry. The formation of Pete & Jake’s by Chapouris and Jacobs helped perpetuate this influence even more, providing not only a resource for quality automotive parts but also a baseboard for several other iconic Pete & Jake’s-built hot rods to be produced. All Ford, right down to the V8 under the hood, The California Kid hot rod is one of the most iconic hot rods in history.
Changed just slightly for the movie, Chapouris’s coupe was fitted with non-functioning side pipes and a C-channel rear bumper, as well as having the Halibrands swapped out for period-correct steel wheels with Ford hubcaps for its television feature spot. Special “The California Kid” lettering was also added to the car’s door panels in the same color as the hot rod’s traditional flames, forever tying the car to its famous movie role.

Now, 42 years later, the car still remains intact and modified only by necessity with a Ford 9-inch rearend and some new chassis components over the last four decades, over which the car has racked up nearly 100,000 miles on its odometer. The car now resides in Peculiar, Missouri with the current owner of Pete & Jake’s Hot Rod Parts, Jerry Slover, who purchased the company (and the car) in 1986, and moved it there from its original California home. Slover and his wife are said to take the car to a couple of car shows every year, between which, the car is on display at Pete & Jake’s headquarters now in Missouri, along with Jake’s Coupe.

Along with cars like the 1932 Deuce from American Graffiti and the 1958 Plymouth Fury from Christine, The California Kid coupe is by far one of the most noted cars in any hot rodder’s recollection of influences. Whether it is the love of the hobby or the affinity of traditional hot rod styling, if you ask any hot-rodder how he got his start, chances are The California Kid car will be at the top of their list.

With it’s traditional style, iconic flamed paint job over factory body lines, and famous movie star status, The California Kid hot rod has influenced generations of rodders and will continue to do so as the traditional build style continues on into the future. And that, boys and girls, is why this 1934 3-window coupe is a hot rod You Should Know!

#3
“The California Kid” The Back Story 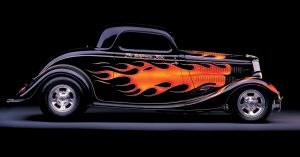 I have been involved with cars all my life, specifically rods and customs. But this story is not as much about me as it is the hot rod coupe I built for myself that became known as “The California Kid”.

During the late 60’s and early 70’s the “T-Bucket” craze swept the country and me along with it. I had a great little car that I built in my parent’s garage and just had a blast tearing up the streets of Southern California. But there was something missing. I guess I was looking for a more basic ride. Maybe build a hot rod that would conjure up the early days of hot rodding. A hot rod that could have been part of the stories I heard as a kid being passed back and forth between my dad and his pals out in the garage.

The more I thought about it, the better it got. It would have to be a coupe. After all, my two favorite cars were the Les Hawkins “15 oz. Coupe” and Gary Wagner’s legendary chopped full-fendered street racer. Both cars were ’34 For “Hemi” powered coupes and the badest of the bad!

As luck would have it, I had mentioned my idea to Randy Troxel. Randy was a local drag racer and really had the pulse of what was going on in the valley. He told me he had heard about a chopped full-fendered ’34 three-window that was stashed in a Glendora garage. He also said it would be a tough sale as the guy really did not want to part with it.

We made contact and after what seemed like years (actually two weeks) the deal was made. I bought the car on New Years Day of 1972 and moved it to our backyard garage in Temple City. I sold the “T” and kept the drive train which included the wheels and tires. I now had all the pieces I needed to get started on my dream car.

I quit my job at Clayton Mfg. Co. (my Dad’s alma mater) in May of 1972 and went to work for Phil Lukens at Blair’s Speed Shop in Pasadena. My wife Carol and I had a house, two small children (Nicole and Peter 4), a ’67 VW and ’50 Bel Air. At the time, leaving a secure job and heading out into the hot rod world did not seem right to most people but it felt right to me. Again the timing was perfect. It gave me the opportunity to hone my skills as a chassis builder and at the same time get the coupe a pedigree. I made life long friends while working at Blair’s; Phil Lukens, Eric Vaughn, Pete Eastwood, Bob Goldsmith and Jim Ewing. Phil was the boss at Blair’s and still is, Eastwood and I were the chassis guys, Bob was on the front counter, Eric ran the machine shop and Ewing…he was there for color. It was a special time and we enjoyed every minute of it.

Carol has always been patient with my car addiction but especially during this particular build. Money was tight as my pals and I worked on the car every free minute. I had lots of help on the car, guys like Richard Loe, Tom Vandenburg and Dick Randal came by when an extra hand was needed. Blair’s engine builder, Buddy Lotsberg made my 302 small-block Ford a screamer. Vaughn taught me how to use the louver press and Dale Caulfield handled the major body-work and paint. For a while I built the car to be an icebox-white hi-boy but, in the end, a full-fendered black, Manuel Reyes flamed coupe would win out.

I met Rod & Custom Magazine’s Gray Baskerville through Bob Langton, a mutual Pasadena friend. It was Gray who came by my house on a rainy afternoon to see the car that actually started my friendship with Jim “Jake” Jacobs. Once Jake and I became acquainted and R&C editor Bud Bryan got involved in the build our coupes were now headed for the cover of R&C. Little did I know then that the now famous “coupes issue” would change our lives forever.

They say that timing is everything…well in my case it was never more true. The popularity of the November 1973 issue of Rod & Custom magazine not only helped Jake and I start out business (Pete & Jake’s Hot Rod Parts) in early 1974 but it was also the cover shot of the coupes that caught the eye of TV and movie producer Howie Horowitz in June of 1974. Mr. Horowitz was producing a made-for-TV movie at Universal Studios and he had been searching for a car to play a key role with the movie’s star, Martin Sheen. With only 4 days left before filming he still had o car. He saw the R&C cover shot and I got the call. Jake and I headed out the next morning and by that afternoon the coupe was cast as “The California Kid.”

They used the car for two weeks and turned my pristine hot rod into a real stunt “work horse.” The driving chores were handled by Jerry Summers (The French Connection) and the stunts were coordinated by Hal Needham (Smoky and the Bandit.) Jake was “hired” on as the official hot rod advisor and babysat the coupe for the duration of filming. We were treated like kings by the cast and crew and it was one of the most exciting times of our lives. The movie debuted on Wednesday night, September 25, 1974 and was ABC’s 200th made-for-TV “Movie of the Week.” The best part of the whole thing was Universal Studios gave us permission to use the term “Home of The California Kid” in the Pete and Jake’s logo and as they say; “the rest is history.”

After filming one of my friends, while eyeballing the damage, asked; “would you do it again?” My answer…”in a heart beat.” The car just never stops giving. It’s been over 35 years since this saga started and “The California Kid” is still giving to this very day. Like I said earlier; creating the car changed our lives forever and I hop you enjoy the movie as much as I enjoy telling “The Back Story.”

Staff member
#8
Cool pics ! I thought that I'd already seen every Cal Kid pic - obviously not ! Thanks.

#15
The California Kid before Flames.