#564
“Man made rain from above, below and from the sides subjects a Mustang to the test which assures buyers of a water-tight vehicle. An invisible dye in the water, when exposed after a three-minute storm to black light, detects by a magic glow the slightest trace of water. The test is one of hundreds which pin the top quality label on Mustangs now produced at Ford Motor Company’s San Jose assembly plant at Milpitas, Calif., where the first Western-built Mustang rolled off the final line July 10, 1964.” Western Public Relations Office, Ford Motor Company, San Francisco.
Source: Ford Motor Company

#570
1968
Trans-Am was hitting its stride in year three. Though Mercury pulled its support, American Motors came on board with their new factory Javelins, contributing to a wide variety of competition. The season looked promising for Ford’s single factory team, the Shelby American Mustangs. For one, with Mercury gone, there was no in-house competition. Two, Ford had a new engine that on paper, looked to be vastly superior to the Hi-Po 289 from years prior. The new engine was the Tunnel Port 302, with four-bolt mains, a forged steel crank, and radical cylinder heads that took their design cues from Ford’s successful NASCAR 427 Tunnel Port engine.
From Mustang 360 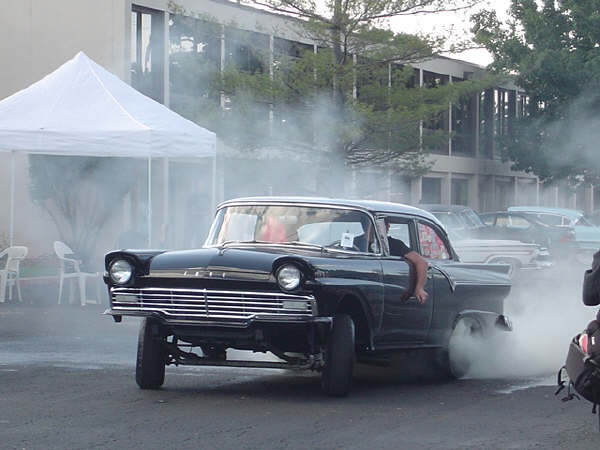 #578
Bill Kolb Jr Ford pickup.
The "Little Yellow Wagon" driven by super salesman Bill Kolb Jr. running a 427 Hilborn-injected Hi-Riser. Larsen Ford in New York was the number two selling Shelby dealership in the country, attributed largely to Kolb. At the '64 NHRA Nationals the Yellow Wagon, Little Red Wagon, and Hurst Hemi Underglass all made exhibition passes to the amazement of the crowds. The Yellow Wagon was destroyed in a bad crash back in '68 though Kolb was unhurt.
From Hot Rod