#462
1962 Ford Mustang I Concept
In the 1960’s Ford wanted to create a compact sports roadster that would both challenge the Corvette and other British roadsters. Several concepts were drawn up including a very unique design by Troutman and Barnes of Los Angeles. This concept was one of the first cars to bear the name Mustang in honor of the World War II fighter plane.
Forming a basis for the car was a steel frame made out of one inch tubing. Roy Lunn and Herb Misch of Ford designed the chassis to accommodate four-wheel independent suspension, rack and pinion steering and disc brakes. Highlighting the chassis design was its mid engine layout.
The concept of having the engine in the middle of a production car was a new idea in the sixties. In 1962 the first mid-engine road-car was released by ATS, a small company founded with the help of Carlos Chiti and Giotto Bizzarrini. Many areas of motor sport were also experimenting the mid engine layout.

The engine itself was a an unusual V4 which was originally designed for an economy car called the Cardinal. This very short engine met the dimensional requirements to fit in the rear and had ample power for the lightweight car which used a stressed aluminum body.
In 1963 the radical Mustang 1 from LA was completed. Its first public appearance was the United States Grand Prix at Watkins Glen. It was driven by Dan Gurney. The car received a lot of attention, but was too complex for regular production. As such the final Mustang design didn’t resemble this concept car in many ways.
Two of these concepts were made. The first was a detailed, but non-running fiberglass mock-up while the second was a fully functional car.

#464
Bill Fredericks’ 427 Ford SOHC-Powered Slingshot
Written by Thomas Voehringe on July 17, 2017
Bob D'Olivo Photographer
“Dragsters for the Street” was the big cover blurb on the Mar. 1968 issue of Car Craft. Bill Fredericks, owner of a meat market in SoCal’s San Fernando Valley, built that issue’s cover car. Business was good and allowed him to spend leisure time feeding his fascination for speed. Five years after a fruitless adventure with a radical jet car at Bonneville, Fredericks was again testing the limits of speed—and insurance coverage—with his 427 Ford SOHC-powered slingshot transmogrified for street cruising. Highlighting the crimson livery and chrome was a hand-carved and -polished walnut dash and steering wheel. But CC focuses on the unique technical bits. If you look closely, you’ll find all the necessities for a “100-percent legal” street car designed by Fredericks: a modified Corvette swing-axle suspension out back and twin supine-mounted radiators under the cab. Coolant is plumbed through the frame. Slicks added excitement to the photo shoot, but the car normally ran Wide Ovals. For all his other design achievements, the CC story credits Fredericks’ superior front suspension for making the rail roadworthy. As he gets fueled at the local Standard station in Northridge (with regular??), it looks like a real-life cousin to Grampa Munster’s “Drag-U-La.” You’re not likely to see anything like this on those streets today—or those gas prices, either (27.9, 30.9, and 39.9 cents per gallon). 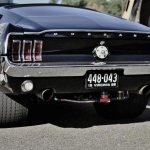