Highly collectable one of a kind piece of automotive art and history Early George Barris design and built by Barris Kustom City Built for the movie “Tom Jones Garage A Go Go” starring Walter Brennan Complete correct restoration by “The Guild of Automotive Restorers” in 2013 to preserve it’s originality from Barris a turbine engine called a Turbonique Monacoque and crossframe construction 10-inch Astro steel wheels
MotoeXotica Classic Cars is pleased to present this extreme futuristic racer built in the early 60’s, the Turbo-Sonic was designed by world famous custom car builder George Barris. The Turbo-sonic was Barris’s attempt to draw a crowd by creating a drag car that looked like a jet aircraft. It was designed as a 25th century three-wheel racing car to develop speeds of 300 mph in a quarter mile racing strip powered by a 50 pound fuel burning turbine engine that can reach 1,000 horsepower. This vehicle was originally built for the movie “Tom Jones Garage A Go-Go” starring Walter Brennan. In 2013 completed a full restoration from “The Guild of Automotive Restorers” and documented on their Discovery TV show “Restoration Garage”, Season 1, episodes 1 “dream Cars” and episode 9, “The Big Day”. They unveiled the beautiful Turbo-sonic at that years’ Megaspeed car show at Toronto. The car was an instant hit, plus they had a surprise guest show up, Skip Torgeson the original test pilot, who hadn’t seen the car since 1965! He was so impressed and moved with the restoration he signed the dash.

The Turbo-sonic sprang forth from those same crazy times and it was Barris’s attempt to draw a crowd by creating a drag car that looked like a jet aircraft. The vehicle was accompanied by all the usual hype and there were claims that it was the recipient of advanced aerodynamic design and was equipped with any number of high-tech innovations. Along with its eccentric styling, the finish off this ultra sonic design carries out the futuristic theme to completion. The color is 40 coats of transformation in a turbine fire effect flame of pearl and fire frost flakes from a white pearl nose into a translucent yellow into an after-burning orange finishing off into fire red.

This car’s engineering and styling were contributions by Les Tompkins, Dick Dean (whose name still appears on the car) and Tom Daniels. Constructed using a combination of monacoque and crossframe construction with alloy tube frame plus a lunamite sheet stock. in addition there are fiberglass fireproof light weight wings. Controls are operated on a four stage solenoid electrical system for safety, with inner-cockpit fuel mixture switches and can be operated with a remote control unit for testing stages 50 feet away from the automobile. The driver sits in complete safety in a fireproof cockpit encased in a unitized cross tube frame roll bar. Total weight of the car dry is 850 pounds with a wing span of 7 feet 9 inches and a v-shaped length of 17 feet encased in a spear-headed delta v-shaped aero-dynamic design fuselage and streamlined wing tip wheel covered pads.

During the restoration, the temporary motorcycle engine with a copy of the original power plant. The original engine was a tiny gas turbine engine called a Turbonique designed and sold by a Florida company. This turbine was advertised and claimed 1,000 hp operated through a v-drive gear reduction unit and directly into a reversed ring and pinion rear end which drives each wheel independently turning 92,000 revolutions per minute and reduced 16 to 1 developing 8,000 revolutions per minute at the wheels. For stopping the vehicle, a combination of an offset blown parachute plus four stabilizer wing flaps are used, and for low speed stopping are Airheart spot disc brakes. Designed and built by Barris Kustom City whose test driver was Skip Torgeson…whose name still appears on the car and autograph graces the dash!. 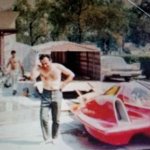 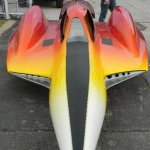 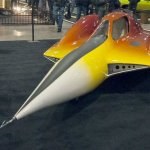 Outrageous is barely enough of a description for this one.
Last edited: May 26, 2020
B

#37
buddy g said:
what is that
Click to expand...
That is Alvin the Chipmunk's Acorn car. Another Barris beauty (?)

#38
lurker mick said:
That is Alvin the Chipmunk's Acorn car. Another Barris beauty (?)

lurker mick said:
That is Alvin the Chipmunk's Acorn car. Another Barris beauty (?)

Mick
Click to expand...
that proves beauty is in the eye of the beholder.