#1
Neal East is one of the most important people in hot rodding. In his younger years he built a blue Olds powered '32 Ford coupe built from a $70 clunker he found in Provo, Utah which appeared on the cover of the April 1958 issue of Hot Rod.
Then, he owned a bronze '32 Ford roadster previously owned by Bill Woodard which appeared in several magazines such as Hot Rod & Rod & Custom in the early 60's.
Then Neal owned the car that current owner Bruce Meyer describes as, "The Holy Grail of '32 Fords", the Doane Spencer roadster. Neal aquired the car from Lynn Wineland and owned and drove it in Southern California from 1970 until 1991 when he moved to Denver. Neal took the car to Denver and in 1995 sold it to collector Bruce Meyer who had it restored by Pete Chapouris at the SoCal Speed Shop in Pomona California. The car went on to win first place in 1997 at Pebble Beach in the newly formed Hot Rod Preservation class.
Neal also worked as a writer at Rod & Custom magazine when it was located at 5959 Hollywood Blvd. in Hollywood in the early 60's and eventually became it's associate editor. Neal then went on to write for Rod Action in the 1970's.
Today, Neal East stll enjoys hot rodding in Denver with his black, chopped, flathead powered '32 Ford coupe built by the late Don Coleman. He also owns a rare '32 Ford panel truck.
He also writes occasionally for the Rodder's Journal.
I was giving a friend of mine a ride in my '28 Model A roadster when suddenly the car quit running. I thought it was one of the Stromberg 97 carburetors loading up with fuel but when I checked the tank, it was out of gas.
The vintage Stewart Warner gas gauge was not working properly. I called AAA and was on hold for a very long time.
My friend decided to call Neal East who lived close by. Neal was there in ten minutes with a gallon of gas!
When I thanked him for his help he said something I'll never forget, "that's what hot rodding is all about".
Neal is one of the truly great people in the hot rod hobby.
Posted by ehgallaghe

#3
Anyone who knows Neal, will tell you he is one of the nicest guys in hot rodding.

#4
Neal's Roadster next to his Coupe. 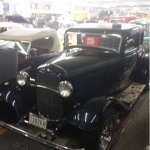