#1
On another thread, I mentioned that the GM dealer in my hometown sold four COPO L-72 427 Chevelles in 1969, heres one of them, at Fathers Day in the Park, in Mission, in the nineties. Note that there are no displacement callouts under the SS emblems, it was delivered this way, also came with the caps, which are unusual on an SS. Around this time I found myself sitting beside the guy that owned this car in the stands at Mission, and we wound up having a long talk about the COPO's and a few other cars that were sold by Mussallems in the sixties. 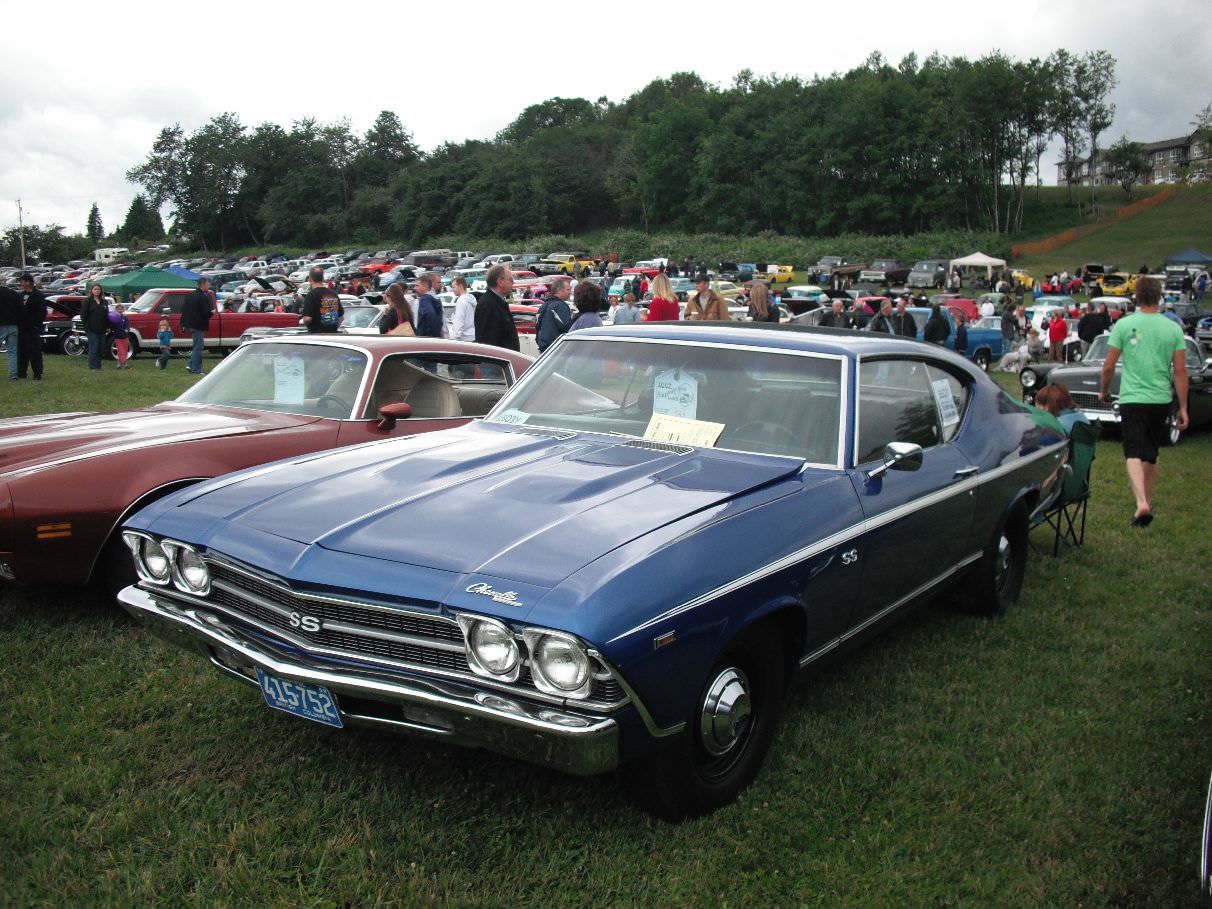 #2
Another car that came through Musseys L-72 427 4-speed '69 Bel-Air. They really didn't advertise it as such, like Nickey or others did in the states, but Musseys sold a LOT of musclecars. According to my cousin Jackie, and other guys I have talked to, you would go through Buck. Buck Kinney was actually working as a mechanic there, not a salesman, but guys would go in, ask for Buck, and he would do up the order for you. 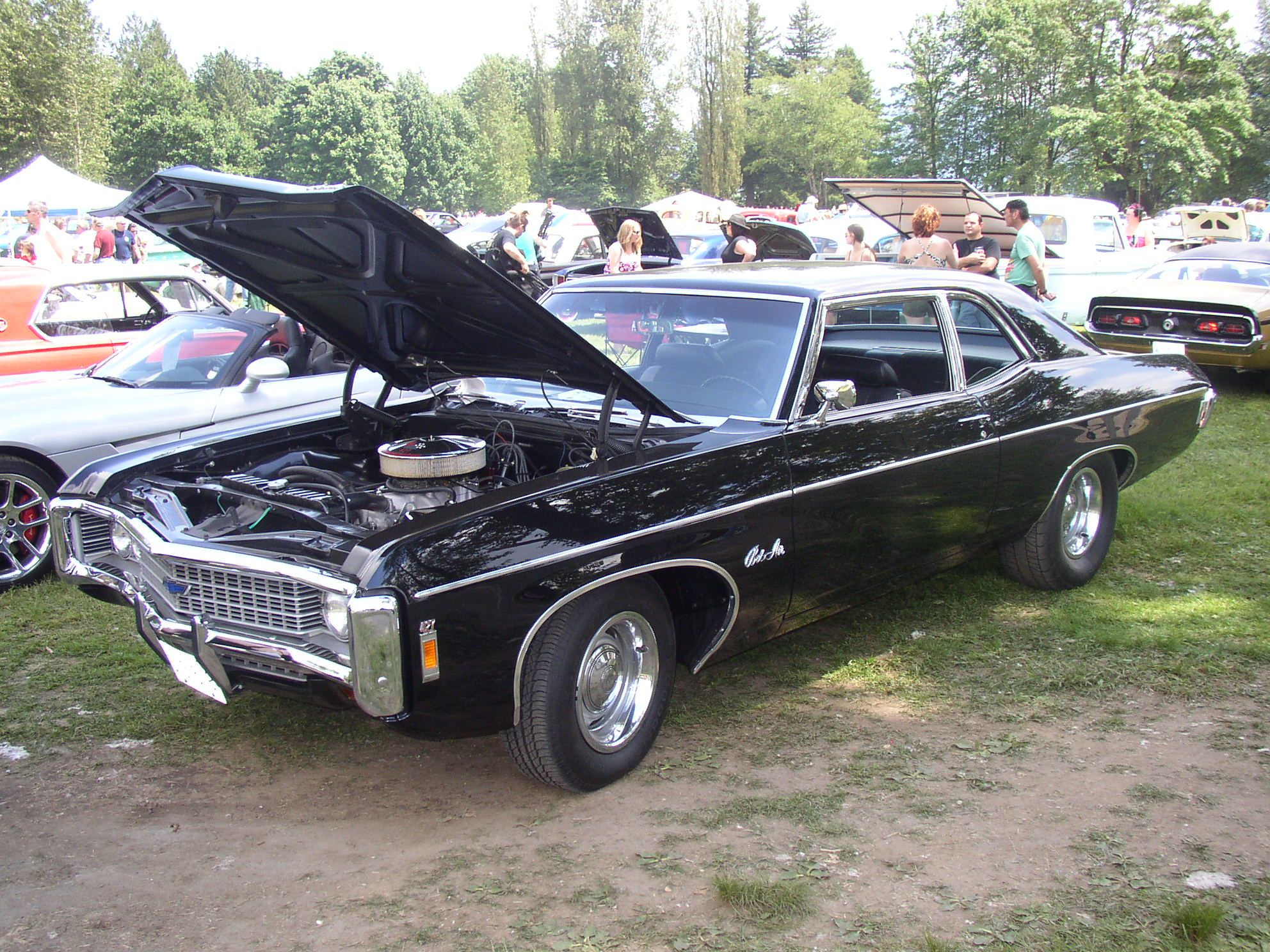 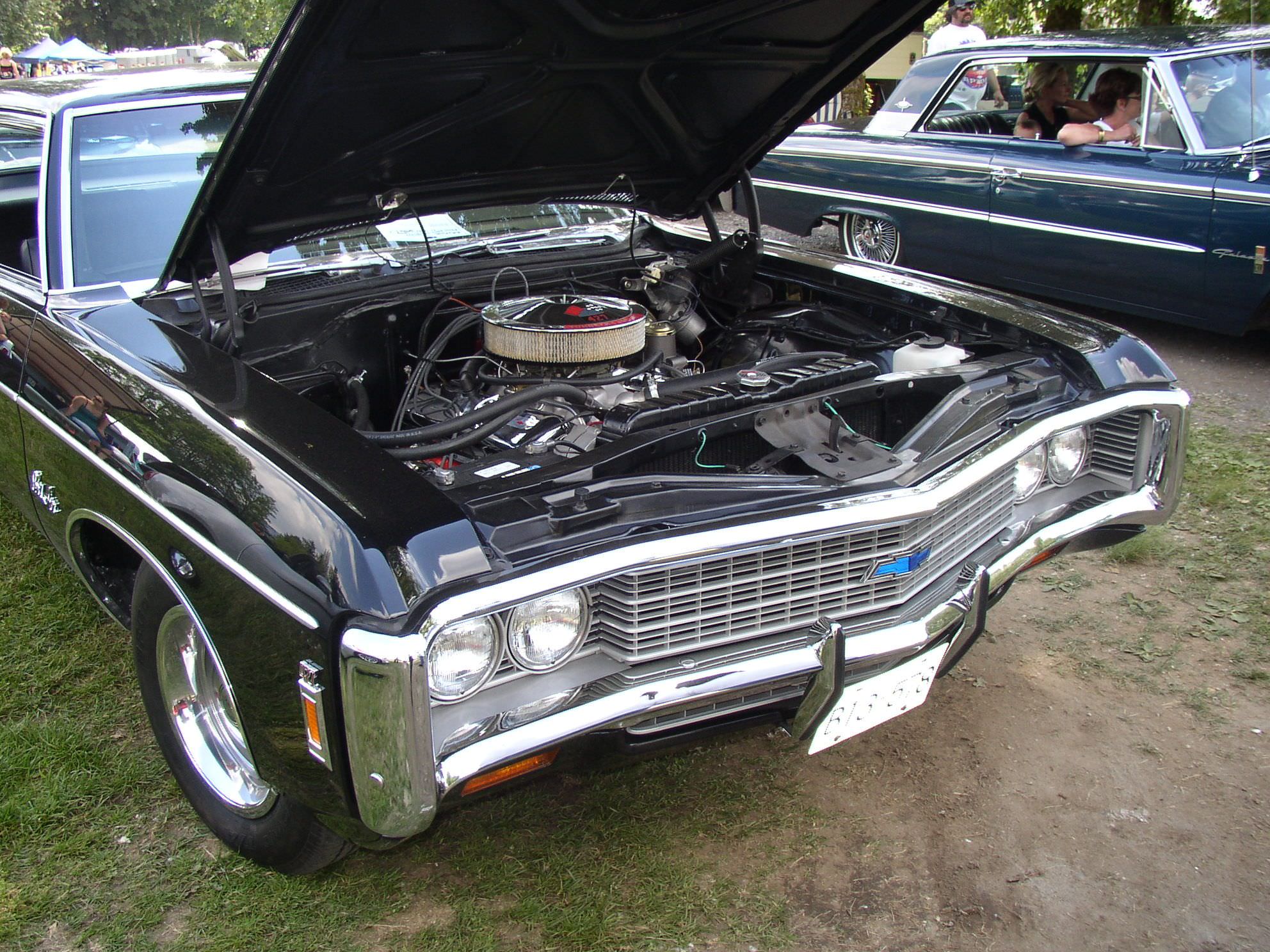 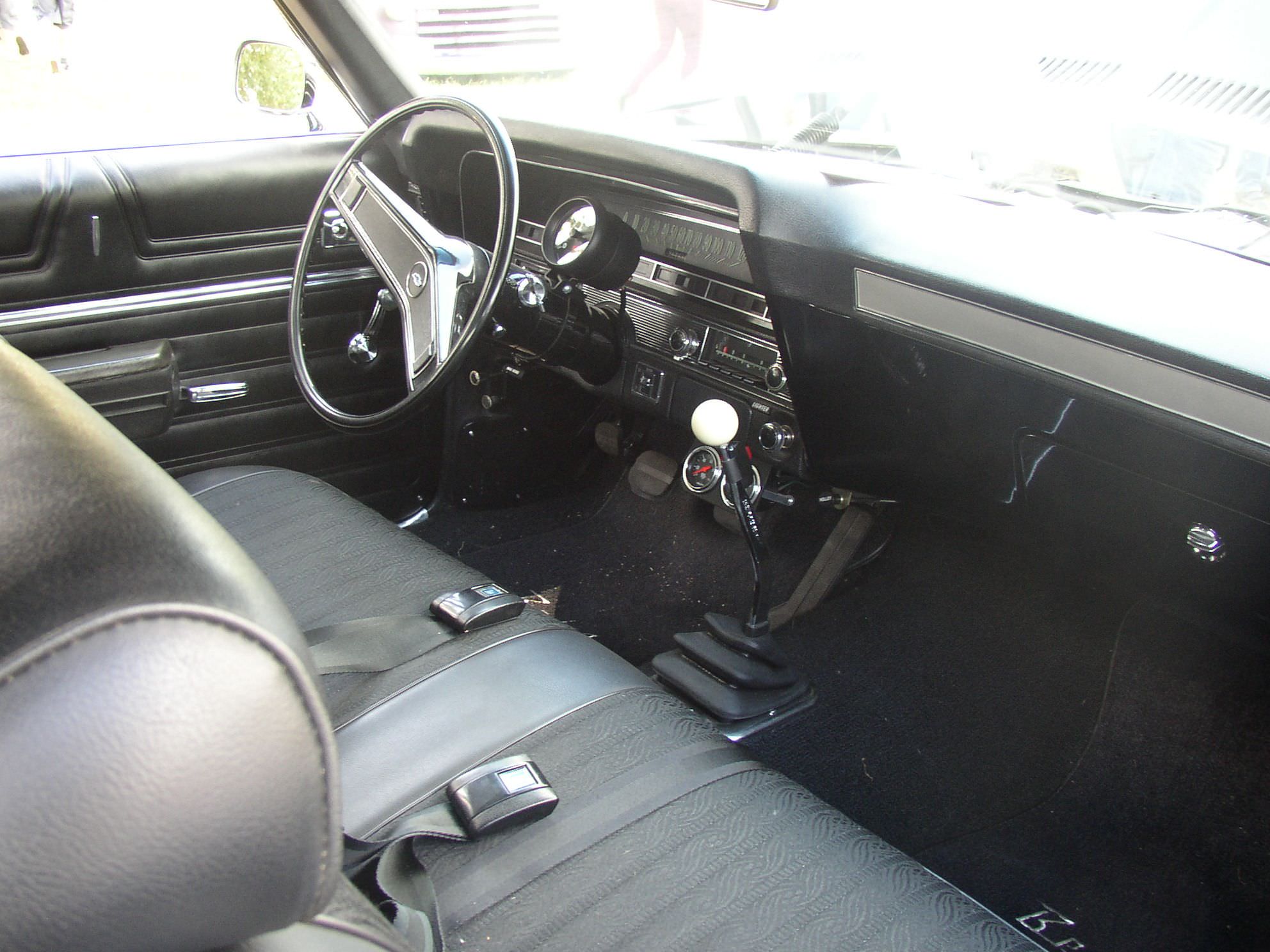 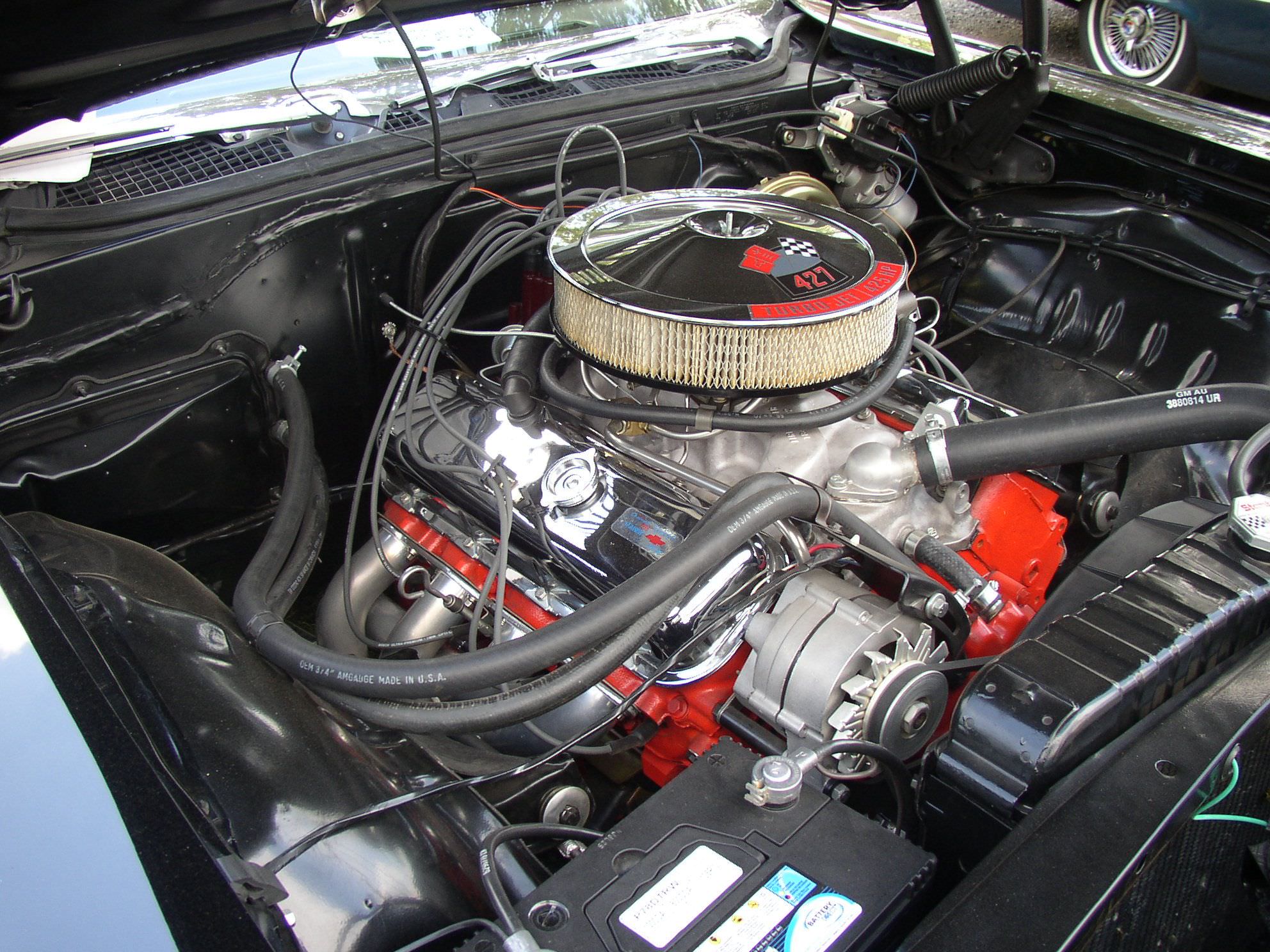 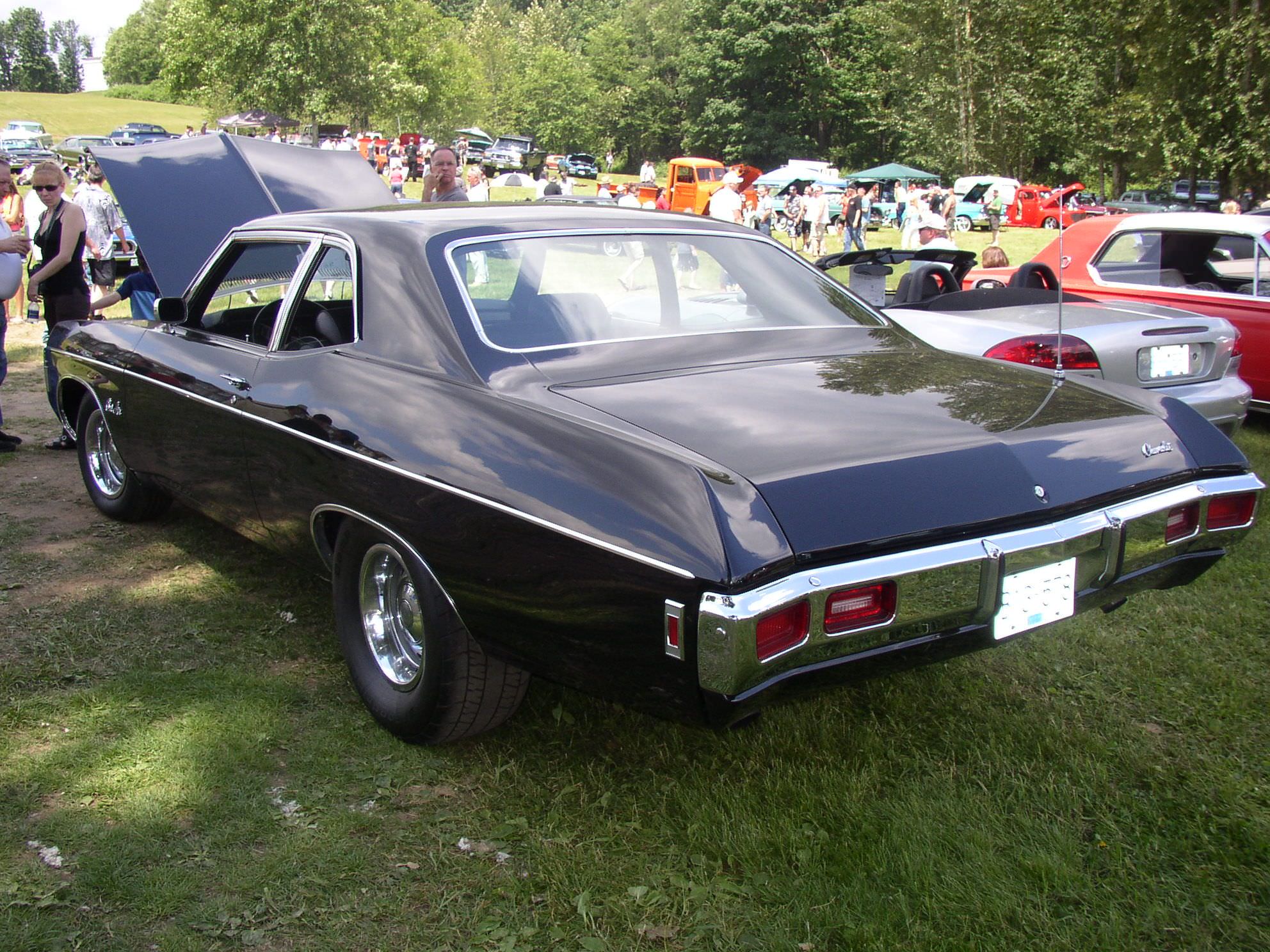 A buddy of mine had a '68 385hp 427 formal roofline SS427 Impala, we made that car into a street/dragrace car, really pretty much butchered it, although the car was on the rough side. But it was VERY fast, wound up running 10.20s@131 in full street trim, at 4200 lbs. It really raised a lot of hell on the streets around here. He was getting the machine work done at Jimmy Richmonds place, they were also running customer cars against us in CPSA Real Street at Mission. I kept telling the car owner not to tell them so much about what was in the motors. It was a low buck deal, 509 with ported iron chevy 990 heads, all the guys we were racing against were running Brodixs and stuff, and we were beating them with heads we bought cheap off a guy we were racing against because "they were obsolete". Jimmy and Eric kept telling him I was "overcamming" the motors, and I kept telling him to shut up, and not talk so much, we held both ends of the class record and I wanted to keep it that way. We were running in a class with a 10" DOT tire restriction, and I was deliberately overcamming the motors, to kill some power at the converter flash point and get the car out past the tree without spinning the tires, and pick it back up down track. Anyway, I kept telling him to just keep his mouth shut and not talk so damned much, I didn't want Jimmy and Eric to start thinking too much about why we were beating them if we were "doing it wrong".
At one point, we decided to buy a day of dyno time, I wanted to test some carbs and try some different cam positions. The motor spun 768 on the first pull, with our so-called "junk heads" and a supposedly "all wrong" cam. As soon as the readings flashed up, Jimmy and Eric got REAL quiet, no one was saying anything. A week later, we were at the track, and Harry Lockerby (he was Jimmys main "shop" car) drove by us, and I could tell immediately they had plugged a new, much bigger cam in it.
J

#3
427 GTE Cougar. Its funny, some cars that are considered relatively rare elsewhere seem to be common here, and other cars that are common elsewhere are rare here. I know of at least 4 427 Cougars in the greater Vancouver area. Aside from these two, theres also a black GTE in East Van, and theres a red one I have seen around as well. Yet Ram Air Pontiacs are like hens teeth. 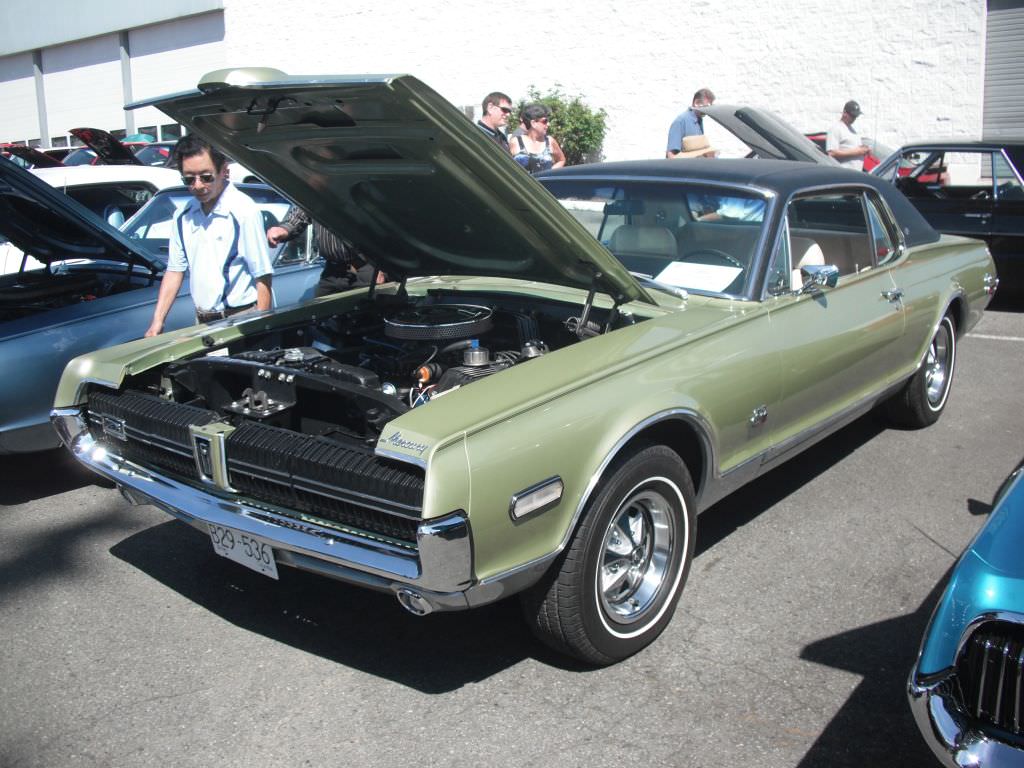 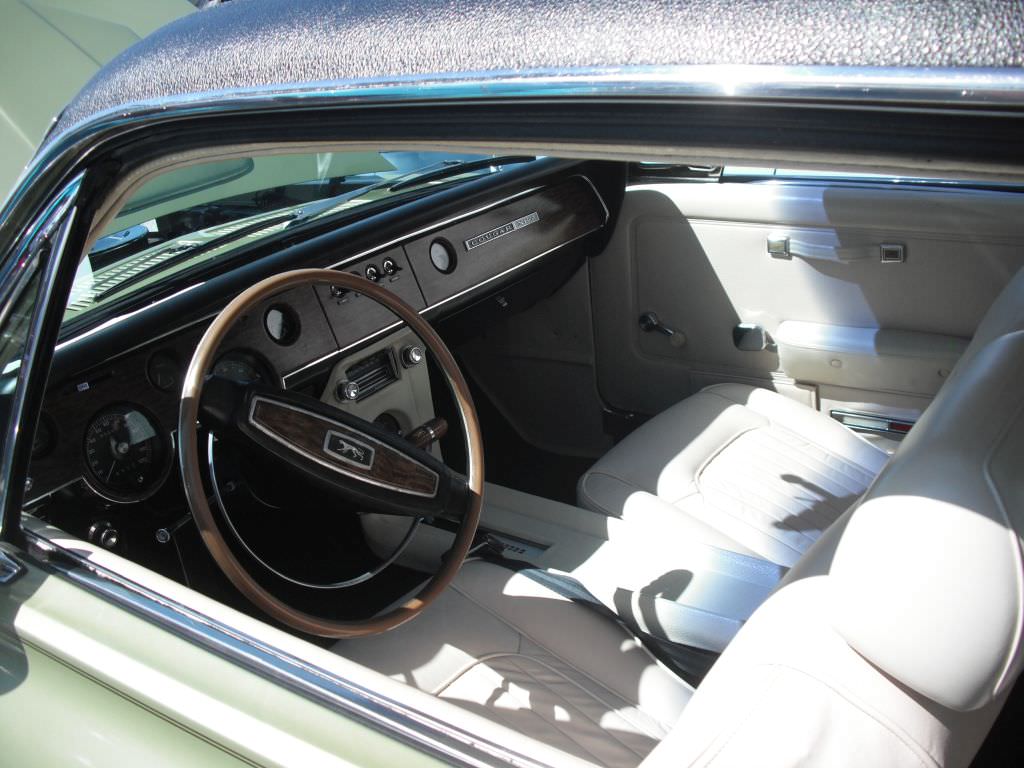 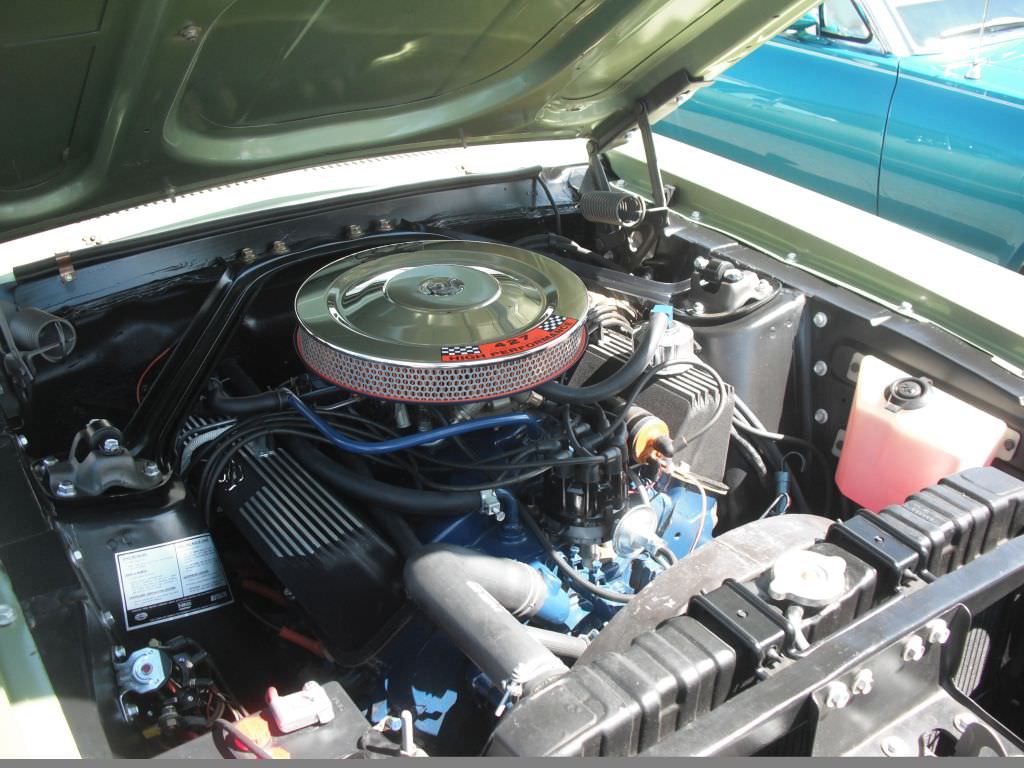 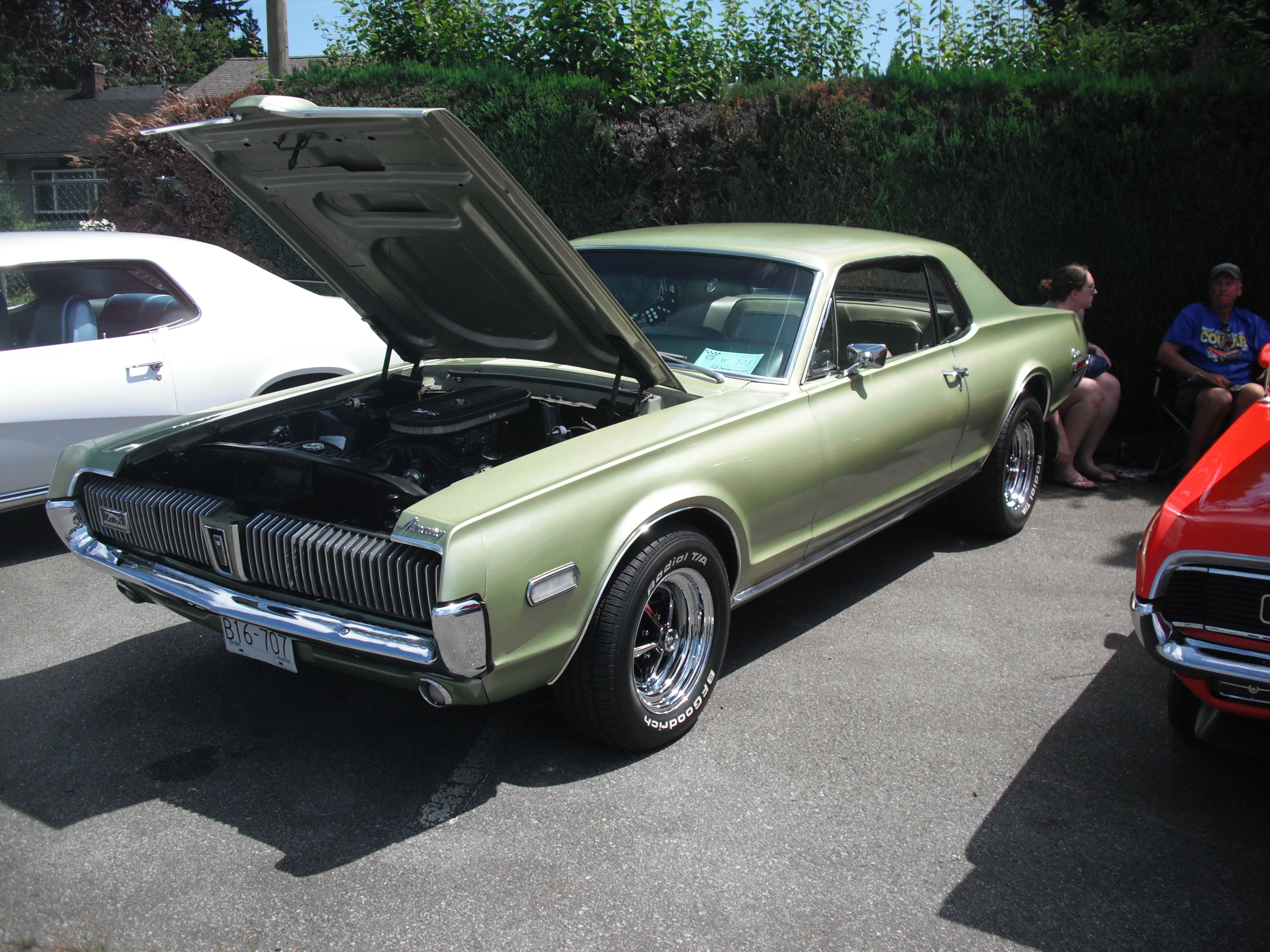 #4
I thought this was REALLY cool. 351CJ 4 speed Gran Torino at an Ocean Park show a few years back. Only one I have ever seen. 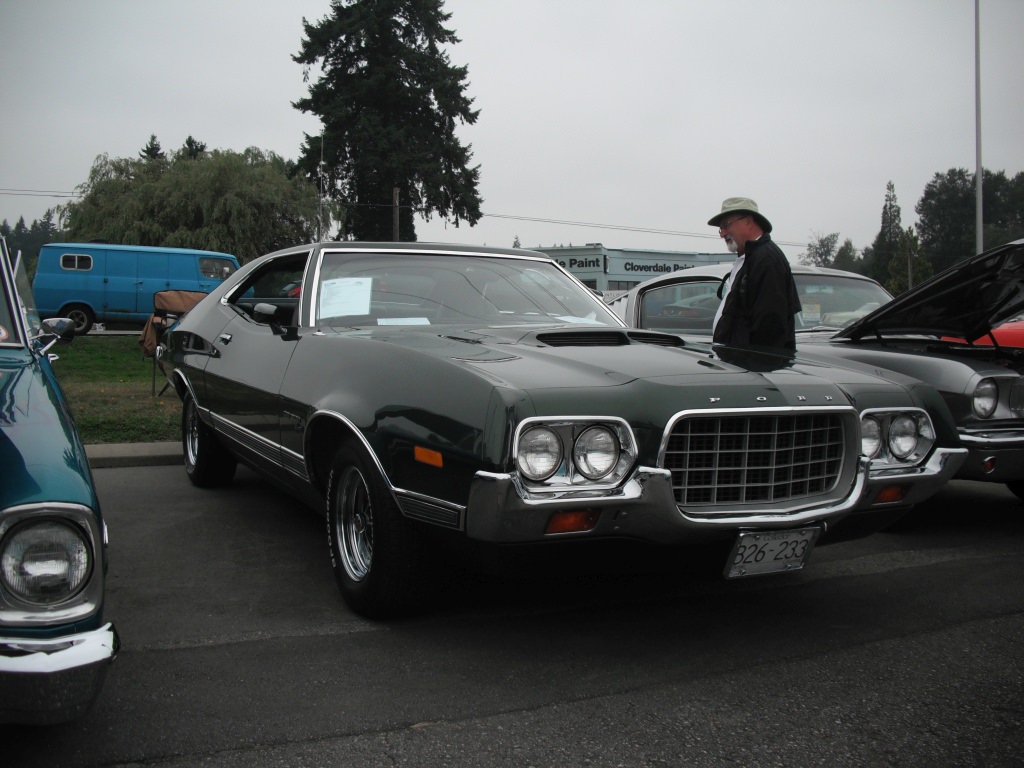 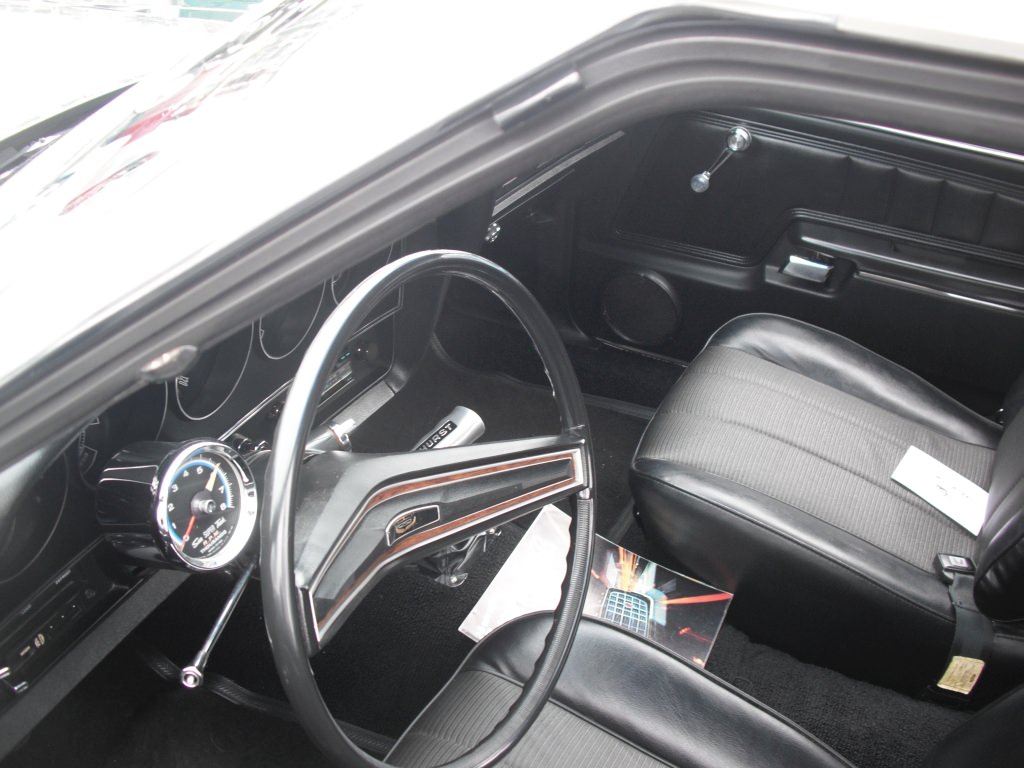 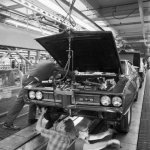 #8
The Cobra Jet was created to compete against the "Big Block" models from Chrysler and Chevrolet. This car had a 335-horsepower, 428 cubic inch engine. At least that was the official power rating. The real number was said to be higher. At the time, Hot Rod magazine called it "the fastest regular production sedan ever built."

#12
There was a nice ‘68 Beaumont SD396 at the GVMPS event this year. Still really pissed about my stupid camera crapping out, PERFECT timing....

#14
Davyj said:
Here is a rare one...68 Chevelle SS 427 wagon..... View attachment 15539 View attachment 15540 View attachment 15541
Click to expand...
My gut reaction is that’s not original, but a car someone has pieced together. I could be wrong, there are two reasons that jump right out at me, #1 it’s pretty well documented that all the ‘69 COPO 427 chevelle were L-72’s, never seen one with an oval,port motor before, and #2, and probably even more important, I have never seen a documented ‘69 COPO 427 chevelle with the engine callout under the SS badge, that’s actually commonly considered to be one of the more obvious signs of a fake. If you look at the blue one I posted, Theres no “427” under the SS emblems, and no callout in the sidemarker bezels, everything I have ever heard indicates that all the ‘69 427 chevelles were like that.
Last edited: Oct 6, 2018

#15
That is some great information...thanks
J

#16
Davyj said:
That is some great information...thanks
Click to expand...
The ‘69 COPO 427 Chevelles are a pet subject with me, as so many of them were sold through the dealer in my hometown.

#17
Mustang Quarter Horse.
One quarter Shelby, one quarter Boss 429, one quarter Mustang, and one quarter Cougar, the Quarter Horse Mustang was a quarter horse in more ways than one. Kar Kraft built this big-block Mustang as a proposed replacement for both the Shelby and Boss 429.

Officially, the Quarter Horse was known as the "Composite Mustang" because it used parts and pieces from cars already in the Ford lineup. The formula was simple: take a chassis from a Boss 429 and mix it with a dash of Cougar XR-7, the fiberglass fenders and hood from the '69-'70 Shelby, and the fastback body and interior of a Mustang. To make it different from the Shelby, the Ford production studio, still headed by Larry Shinoda, placed a large Mustang running horse in the center of the grille and filled in the Shelby hoodscoops.

#18
Did someone say Muscle Car's

#20
The 1966 & 1967 Chargers came standard with a pinstripe on the roofline. It was available in Red, White, Blue or Black depending on what the body and interior colors were. In 1967, if you ordered either the Hemi or the 440 , it was usually Red to compliment the standard Redline tires. It could be deleted.