#164
Borg Warner Trophy
The Borg-Warner Trophy is one of the most coveted trophies in the world of sports. While it pays tribute to many of the most revered drivers in auto racing history year-round, during the Month of May it becomes the focal point for the drivers attempting to qualify for the Indianapolis 500 Mile Race, a reminder of the glory and tradition associated with winning the fabled event.
With victory at the Indianapolis 500 comes the honor of having one's face sculpted onto the 74-year-old trophy. Separate squares are affixed to its sterling-silver body, on which each winner's face, name and winning year are permanently etched. A silversmith is commissioned each year to create the new champion's portrait/sculpture in bas-relief for placement on the trophy.

In 1935, the Borg-Warner Automotive Company (now called BorgWarner) commissioned designer Robert J. Hill and Spaulding-Gorham, Inc., of Chicago, to create the trophy at a cost of $10,000.
Unveiled at a 1936 dinner hosted by then-Speedway owner Eddie Rickenbacker, the Borg-Warner Trophy was officially declared the annual prize for Indianapolis 500 victors. It was first presented that same year to champion Louis Meyer, who remarked, "Winning the Borg-Warner Trophy is like winning an Olympic medal."

Besides displaying Indianapolis 500 champions, the trophy features a 24-karat gold head portrait of the late Speedway Owner and President Anton "Tony" Hulman Jr. in tribute to his rejuvenation of the track and the Indianapolis 500 after World War II. Hulman's image was added in 1987.

The last driver to have his likeness placed on the original trophy was Bobby Rahal in 1986, as all the squares had been filled. A new base was added in 1987, and it was filled to capacity following Gil de Ferran's victory in 2003. For 2004, BorgWarner commissioned a new base that will not be filled to capacity until 2034.

Since 1988, an 18-inch tall replica of the trophy, a "Baby Borg," has been crafted in sterling silver for presentation to the champion. A new tradition began with the 1997 winner as BorgWarner also presented the winning car owner with a "Baby Borg."

Each May, the Borg-Warner Trophy is featured at a number of Indianapolis 500 events, including the public drivers' meeting at the track, the 500 Festival Parade and the post-race Victory Celebration. Immediately after each race, the trophy is hoisted into Victory Circle with the winning car and driver for photographs.

#176
Darrell Hanestad from Nor Cal enjoys a victory.

#177
Mark wrapped up the Trans-Am championship for Chevrolet by winning at Bryar.
1968 Photo by Ron Lathrop

#178
Jackie Stewart takes and celebrates victory in the last GP on the Clermont-Ferrand rollercoaster.July 2, 1972. 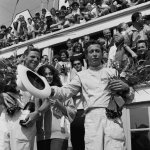