#61
Once upon a time in the 90's, here in beautiful uptown-downtown Monterey, CA, we had, what was called "Cherries Jubilee". It was a 3 day event in downtown Monterey where people from all over would bring their rides from stockers, to prostreet to classics. There was a cruise on Friday night that went for 5 hours straight. I would remember standing in the middle of Del Monte Avenue and directing traffic the full time and maybe getting a couple of passes in with the red Corvette or the white 59 Apache. Anyway, there was this guy..........from Salinas, who chopped and extended the back of a bullet nose Stude and installed 6 bullet tail lights across the back. In primer it was the show-stopper. I heard that he had moved up to Oregon with the car and never saw it again.......but what a ride! He was one of these "lesser-knowns" that you would love to spend time with. Just wondering if the car got "finished" and this was it.
T

#63
For those that don't know, Studebaker built carriages before cars. 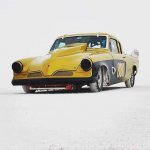