#22
This one we put a fat man front clip in for a friend in So. Cal.. it now get a frame off rebuild.. the one in the back ground was mine and also given to me by the same guy who gave me the lark....was using the hood off mine for mock up..

#23
They were sure unique looking trucks. 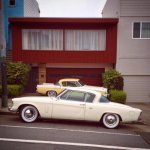 #27
The Kart Hauler
Daniel Strohl on Dec 27th, 2010
If you really wanted a sedan-turned-pickup, there are plenty of options for you out there, from the European versions done to skirt tax laws to the Australian Utes, to the hillbilly-engineered versions to be found here in the United States. This 1953 Studebaker “Kart Hauler” is none of the above; instead, it’s a genuine 1950s-built custom with Grand National Roadster Show history. From the seller’s description:

This stunning 1953 Studebaker coupe-based vintage show car was first built in 1958 by Lee Talbot and Sam Chakries and first shown at the 1959 Oakland Roadster show, known today as the Grand National Roadster Show. Combining the aerodynamic Studebaker frontal design of the early 1950s with a pickup bed, similar in concept to the Ford Ranchero or Australian” Utes” of the era, the Kart Hauler was literally designed to haul the fast go-karts that were popular during the late 1950s and early 1960s.

A painstaking restoration was completed in January 2009 in time for the Kart Hauler to make its second show debut at the Grand National Roadster Show in Pomona, California, marking the 50th anniversary since its first appearance in 1959.

The flawless restoration was completed with no expense spared, including body and paintwork by Jon Falcon, with upholstery by “Howdy” Ledbetter. For power, a 259-cubic-inch V-8 from a 1955 Studebaker President was used, with period speed parts including a Stu-V dual-carb intake with dual Stromberg WW two-barrel carburetors, as well as Offenhauser finned valve covers, a finned valley pan and a number of other polished goodies. Power is harnessed by a Borg-Warner/Studebaker T86 three-speed manual transmission with overdrive and a period-style floor shift, routed to a 4.27:1 final drive.

#28
here is one from the drags last night 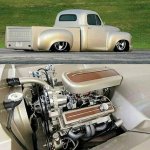 Hope everyone has a fine Autumn.