#1
1934 Ford 3-Window Coupe owned and restyled by Seattle Headers member Jerry Berg of Seattle, Washington. Jerry bought the old coupe from a couple in 1956. It was their only car, so he had to find them another car before he was able buy the '34. Jerry's coupe is also known as the "Northern Star", and it gained national recognition when it was featured in Hot Rod Magazine November 1958. When the story was made, Jerry was 21-years old, and the car was supposedly his sixth hot rod. The first version of the car was completed in 1958, but Jerry wasn't happy with the way it handled on the drag strip. The tires spun and made a great smoke show, but he didn't have enough weight in the back to go faster than 13 seconds in the 1/4 mile. According to Hot Rod Magazine November 1958, the coupe was weighing in at the bottom of the "B" Gas Class, cranking on 104 with a 13.0 e.t.

The Northern Star featured a 4 inch top chop, shaved door handles and solid hood sides. The hood was entirely formed out of aluminum. The deck lid handle was removed, the deck lid corners were rounded, and the rear end was fit with a simple nerf bar carrying the license plate in the center. The fenders were filled in, and the taillights relocated to the nerf bar. The body was painted lime gold metallic, and a set of sparkling 1956 Lincoln Premier wheel discs were installed for a modern look. The paint was ordered from Barris Kustoms. The running boards were made out of deck material normally used on high end yachts.[2] The upholstery was done in fully padded white pleated leather. Pleated leather was used on the bench, door panels, dashboard, roof and roll bar. The door panels featured a nautical star on each door.[1] Under the louvered hood, Jerry installed a monster of a completely chromed Firedome Hemi engine from a 1953 DeSoto. The DeSoto engine had been bored to 276 Cu, In. and fit with a 4-carb Weiand manifold, an Iskenderian camshaft, Mallory ignition and large valves and ports. A Cragar adaptor hooked the engine to a Ford transmission. Hydraulic brakes had been installed along with adjustable shocks and wide base safety rims. The car rolled on 6.70 x 15 Double Eagles tires in the front, and 8.20 x 15 tires in the rear. The front axle was dropped 2 1/2 inches and fully chromed. 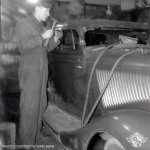 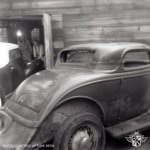 Staff member
#3
Another of my favorites ! Here are a few pics in color:

Staff member
#5
And a few more B&Ws. Most of my pics courtesy of Rik Hoving, who got the original pics from Jim Berg's relative. 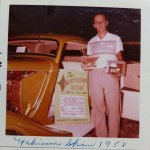 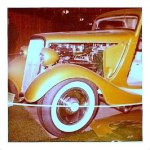