This “Aztec Golden Copper” lacquered ‘32 Ford 5-window competition-style street and show “Deuce” coupe was built by the late Don Tognotti, a noted Sacramento area entrepreneur and promoter whose 1914 “King T” won the coveted America’s Most Beautiful Roadster (AMBR) award in 1964. Tognotti later went on to own and manage the Grand National (Oakland) Roadster Show. He purchased this soon-to-be radical deuce from Bob King in June 1960, quickly set about making it a show winner and succeeded beyond his wildest expectations.
An early example of ‘wedge channeling,’ where the body was dropped a few inches lower over the frame in front than in the rear, (for a more pronounced ‘rake)’, the sleek Tognotti coupe’s roofline was chopped 3.5-inches, and the roof was filled. It was then radically channeled ten inches in front and eight inches in the rear, over a 4-inch stretched, pinched and narrowed ’32 Ford frame.
A dropped tubular front axle, a flattened semi-elliptic leaf spring, with split wishbones and inclined airplane-type tubular shocks smartly lowered the front end. A filled cowl vent, solid roof insert, and a rolled rear tail pan completed the major body modifications. The extended 110-inch wheelbase helped showcase this coupe’s aggressive, permanently raked stance, and gave it a very distinctive appearance.
This hammered hardtop’s competition flavor stemmed from its “suicide” front end, 331 cubic inch ’51 Chrysler Hemi power plant, eight individual chromed headers that sweep all the way under the rear axle to flared exhaust tips in the rear; its beefy ‘37 De Soto 3-speed floor shift transmission with a competition clutch, external four-into-one headers, and polished Halibrand slotted and polished mag wheels with 8:20 x 15 Bruce “pie crust” whitewall drag slicks. Inside the trunk, an 18-gallon fuel tank with a Bendix electric fuel pump feeds four Stromberg 97 carburetors on a polished Weiand intake manifold. A chromed firewall, typical of popular modifications in that period, reflects the polished and plated Hemi.

The coupe’s lavishly rolled and pleated Black Antique Naugahyde interior – even the headliner is black – is unusual because the black-grained instrument panel, replete with period white on black winged Stewart-Warner speedometer, water temperature and fuel gauges, is located on the floor between the two bucket seats. The steering wheel is a three-spoke, race-inspired Bell Auto Parts accessory; the shift lever sports an aggressive custom shift knob and the steering column has a chromed rippled cover that matches this car’s competition theme.
Period show touches include a neatly filled and peaked grille shell with an insert made of 3/8ths-inch clear plastic rod and horizontal X-shaped mesh bars. The lower portion of the shell was omitted and instead, a rolled front panel covers the chopped frame horns. Circular ’60 Corvair taillights accent the lower rear panel. Both the hydraulic brake and clutch pedals are ‘swung’ units, operated by a matched pair of chrome-plated, firewall-mounted master cylinders.
Right after it was completed, the altered wheelbase five-window convincingly won its class at the Grand National Roadster Show in Oakland in 1961, and starred on the cover of Car Craft the following year, where it was featured in a special July 1962 article called, “Those Swingin’ Coupes/Sedans.” Tognotti’s freshly-built show coupe won seven major awards and countless others in its first two years of competition. A show sensation, right from its outset on the circuit, it took “Outstanding Coupe” at Sacramento, Fresno and Hayward, the “Sweepstakes” award at Yuma City, first place at San Francisco, and “U.S. Western Champion” at Oakland. In an unusual move that proved the coupe’s viability, Tognotti frequently drag-raced this car, as well.
After Tognotti had probably won all the awards there were to win, the coupe was sold to Bob McCloskey and was featured in Rod & Custom in September 1962. McCloskey added his own racy touches: a GMC 6-71 supercharger, an Isky 5-Cycle racing cam, Hilborn fuel injectors and lightweight Jahns pistons. These additions boosted the Hemi’s output to 490-bhp. The new owner also added vestigial finned fenders, front and rear.

Next the Avenger was sold to an Oregon man who reportedly installed a blown Chevrolet V8 engine. Jack Ivie of Tacoma then purchased the Avenger and showed it in 1982 at the 26th Anniversary Portland where it won first in its class, apparently fitted with a blown 327 cubic inch Chevrolet engine.
In 1996, Ivey sold the coupe to Ken McBride, a major Seattle collector of sports and classic cars, who commissioned a first-class restoration to ready the car for its Pebble Beach Concours d’Elegance showing in the Hot Rod Class in 2001. McBride’s restoration was facilitated by Don Tognotti’s original hand-written notes, which detailed every modification to the car, along with the cost of each item. Ken McBride kept all these painstaking records, which will be presented to the winning bidder.
McBride enthusiastically drove the Avenger on the Pebble Beach Tour. Exhaust blasting and Halibrands flashing in the sunlight, it was the only hot rod class car that year to finish the driving event. While the Tognotti coupe did not win an award at the Concours, it impressed everyone with its aggressive stance and the sound of that hefty Hemi running through eight straight pipes.
Don Tognotti’s Avenger has all the desirable provenance of a top-flight historic hot rod...a famous owner, a multi-carb Hemi V-8 engine, drop-dead good looks, multiple show wins, serious provenance and a well-documented history. Best of all, it is fast, loud and eminently drivable.
This car was auctioned off by RM Auctions in September 2009 at the Petersen Automotive Museum, Los Angeles, California.
331 cu. in. Chrysler Hemi V8 engine with four Stromberg 97 carburetors on a Weiand manifold, external exhaust headers, three-speed De Soto manual gearbox with floor shifter, tubular front axle, semi-elliptic leaf springs, front and rear drum brakes, solid axle ’42 Ford rear end with semi-elliptic leaf spring. Wheelbase: 110"
Source: RM Auctions 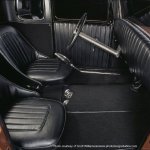 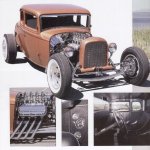 #5
After Tognotti had probably won all the awards there were to win, the coupe was sold to Bob McCloskey and was featured in Rod & Custom in September 1962. McCloskey added his own racy touches: a GMC 6-71 supercharger, an Isky 5-Cycle racing cam, Hilborn fuel injectors and lightweight Jahns pistons. These additions boosted the Hemi’s output to 490-bhp. The new owner also added vestigial finned fenders, front and rear.

#6
ts3x65mph said:
After Tognotti had probably won all the awards there were to win, the coupe was sold to Bob McCloskey and was featured in Rod & Custom in September 1962. McCloskey added his own racy touches: a GMC 6-71 supercharger, an Isky 5-Cycle racing cam, Hilborn fuel injectors and lightweight Jahns pistons. These additions boosted the Hemi’s output to 490-bhp. The new owner also added vestigial finned fenders, front and rear.
View attachment 83093 View attachment 83094 View attachment 83095 View attachment 83096
Click to expand...
Thanks for all the info on the Avenger Beppie. I just can't quite figure those front fenders!
T

#7
The last time I saw the "Avenger" was at the Seattle Roadster Show in about 2005 I think. It was displayed with the Red 5 window So-Cal Speedshop built that had an injected hemi and was channeled a couple of inches. So, maybe the "Avenger" is in a northwest collection?