#5
This roadster was built in 3 weeks. Started with a low mileage chassis and brookville body from John Stimac. John Vukisich and I went through all the old parts I had taken off other projects. The top was 34 irons cut down and welded. The interior and door panels were original leather from my phaeton. Engine was a 59L with tattersfield speed equipment. Body had fake patch panels welded in, curtain holes filled, with the welds done with latex caulk to look real. Painted with a brush. We took it the Nats at Louisville in 2000and always had a crowd following it. We had 31 business cards in it the first day asking if it was for sale. The car showed up at the 75th anniversary show as a survivor from Minnesota. We must have done a good job just having a lot of fun!
Last edited: Aug 3, 2018

#14
ts3x65mph said:
Those look like early Mustang buckets ?
Click to expand...
Yes - as is rear seat which has been narrowed and altered to fit. Re-webbed belts that hang off the cage are from a later 60's Mustang.

#15
My sons high school hotrod. Built with left over parts. Cab was chopped in late 40's.

Deuce Addict said:
Yes - as is rear seat which has been narrowed and altered to fit. Re-webbed belts that hang off the cage are from a later 60's Mustang. View attachment 4576
Click to expand...
At 1 time I was thinking of using them in my coupe.I think there great for a Deuce.

#17
My sons pickup when he graduated high school. 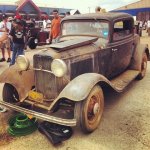