Exhibitor and judge at car shows

Class winner in 8 out of 8 various car shows, and 3 Best of Show Awards

First competition car to be build with 100% chromed running gear

Has held over 20 national or track records

Vehicles he has designed and/or built have appeared on the covers of car magazines and more than 20 articles have been written on him, his cars and crews.

#2
Gone Racin’…with Dave Marquez
By
Richard Parks, Writer and Roger Rohrdanz, Photography
In boxing there is a term used to denote the very best; “pound for pound.” No matter how small a boxer might be, his skill is equal or superior to the bigger man. Perhaps we need to have an equivalent term in auto racing. How about “lap for lap” for the oval racers and “round for round” for the drag racers. Due to the misfortunes in life, many racers have short careers, and yet they shine brilliantly, like a flaming nova, then fade away.

One such man was David Marquez, from Santa Paula, California. His father was a baker who came to California from Mexico. Dave’s mother was born in Spain and took great pleasure in telling her children how she traveled by tall masted sailing ships to Hawaii by way of Cape Horn as a small child. Marquez grew up working in his father’s bakery, learning to operate the machinery and deliver baked goods to the stores around Ventura County. In school he excelled in track and ran in the 440 and 880-yard races. As a typical young man growing up in the post World War II years, he loved cars and the local hot spots for racing. Marquez was a charter member of the Motor Monarchs car club of Santa Paula. They raced at Goleta, Santa Maria and other tracks in the Ventura and Santa Barbara counties, and having tasted victory, challenged the best drag racers in Southern California on their home dragstrips.

Dave and his friends built the famous “880” roadster, powered by an Ardun Overhead engine. According to Marquez, his car was the first to have a detachable body and to be painted in a fluorescent paint (orange with white background). The orange fluorescent paint was “borrowed” from the military base at Pt. Mugu by one of the club members who worked there. The “880” roadster (named after the track event that Dave excelled at) was as fast as it was beautiful, and won numerous trophies throughout California in the early 1950’s. When NHRA announced that the first National championship would be held at Great Bend, Kansas, in 1955, Marquez and the Motor Monarchs were ready. In natty white uniforms with the club logo imprinted on them, the Motor Monarchs were a professionally solid team, hoisting the body on and off to work on the car, and dazzling the other car crews with their flawless teamwork. Dave drove the “880” to the National Championship in the “B” Roadster class and followed up with a smashing repeat victory at the 2nd NHRA National Championship in Kansas City, Missouri, in 1956. The Motor Monarchs brought home trophies for wins, best looking crew and best looking car. The car and trophies were displayed on the cover of Hot Rod Magazine and other magazines and newspapers of the day.

A tragic accident caused Marquez to sell his beloved “880” and to leave racing. He worked harder than ever with his father to make their bakery a regional supplier. Dave married his childhood sweetheart, Shavie, and raised a son, Ron, and put his short career into the family albums. Like so many racers before and after him, Dave had to leave racing behind and concentrate on family and business. Though he was no longer an active racer, he still had time to help others. Dave was an active supporter of the Ventura Sports Hall of Fame, and one of its honored members. He led a Boy Scout troop in Santa Paula. Marquez was a supporting member of the prestigious Gold Coast Roadster and Racing Club and helped to run their annual “Gas-Up” party and Dry Lakes Hall of Fame. Dave organized the annual Motor Monarchs Reunion in Santa Paula, and invited out of town guests to stay with him. He dispensed traditional “Old California” style hospitality to anyone who visited him. He opened his wallet to help out with expenses so that no club member ever had an excuse not to attend the Reunions. Marquez was an honorary member of the legendary Bean Bandits car club of San Diego, and respected by many other existing car clubs throughout the West Coast. He won “America’s Most Beautiful Competition Roadster” award at the Oakland Roadster Show in 1956. He was invited back to the same show in 1957 to be one of the judges at this most prestigious event among hot rod enthusiasts.

In 1992 Marquez and his crew; John Davison, Howard Clarkson, Robert Olinger and Eddie Martinez (Ben Martinez died in 1969) returned to Great Bend, Kansas, as honored guests at the 1955 NHRA Nationals Reunion, and the Governor of Kansas. Marquez was always the first to volunteer his help and to spend freely to aid a worthy cause. He demanded the same respect in return, and could be quick with a rebuke if he thought you were being disrespectful. Dave Marquez passed away last year after a heroic struggle against cancer. Though his racing career was shortened by tragedy, his contemporaries will always remember him as a giant among men. 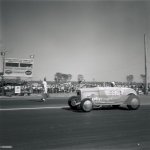 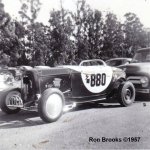 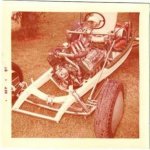