Staff member
#4
Thirty2ragtop said:
Give a yell when yer in town!
Click to expand...
Will do. My wife and I haven't been out there in a few years. We are long overdue. 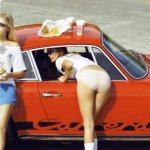 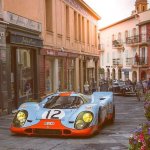 #16
The other road-going 917. 917-021 was formerly a Martini team car, the original chassis,and bodywork as sold to Manfred Freisinger in 1972. Three years later Joachim Grossmann bought and restored 917-021. He painted it white, detuned the engine and used it as his road car.

Built in 1969, 12 cylinders, 5 liter displacement, 600 hp at 7500 rpm. What did not succeed the Porsche plant Joachim Grossmann: To admit a Porsche 917 in Germany for the road. In cooperation with the TÜV, the unique copy was created. The race car differs from the race car, especially in the interior: It is equipped with white leather. In addition, the 917 got a modified exhaust, a handbrake and a window heating.

Grossman owned the car till 1983, then he sold it to American Don Marsh. Marsh brought the car back to racing specs, but it had still some features which had been assembled by Grossman in order to get the car street legal, for example, the direction indicators in the front light housing. And the car still had the front nose with the more rounded shape. After a few the car was repainted in the purple/green color scheme of 1970.
Marsh sold the car in 2002 to the famous race driver Bobby Rahal, but Rahal owned the car only for about one year. Then he sold it to Juan Barzi, who took it back to Europe, more precisely to Geneva in Switzerland.
Barzi drove historic races and so it was no wonder that 917-021 had heavy signs of usage when Jürgen Barth inspected the car 2007 in Switzerland. But there is no doubt that this car is the real 917-021 of the AAW Racing Team even if the frame was exchanged by the factory in 1970.
http://www.i-t-d.net/Porsche_917/917-Strasse/917-strasse.php