Became one of the Most Famous
Hot Rods in History. 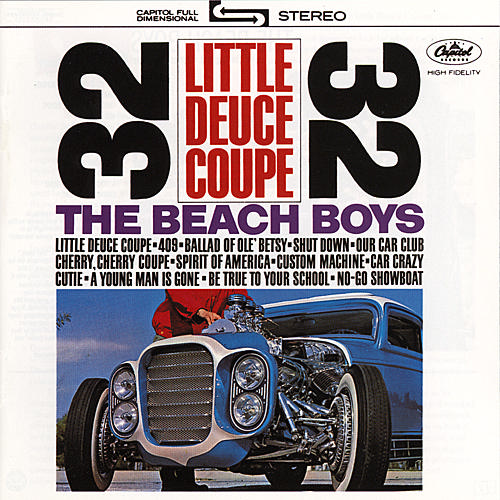 When it appeared on the cover of the Beach Boys popular album "Little Deuce Coupe" in 1963, Clarence "Chili" Catallo's beautiful '32 coupe hot rod...then nicknamed the "Silver Sapphire"...became an instant star.
To millions of people, it was the very definition of the American Hot Rod, and shortly thereafter Chili's car became known by a new name...the "Little Deuce Coupe."
The car that became the model for the Beach Boys' song has been completely restored to its original condition and is comfortably retired in Michigan.


Here's The Little Deuce Coupe Story...
The car was bought in 1955 by Clarence Catallo, who was just 15 years old and didn't have a driver's license. The little coupe was bought at a gas station across the street from his parent's grocery store in Allen Park, Michigan for $75.00.

A friend drove the car home for him, and the transformation into a custom began immediately.

Catallo replaced the original stock Ford engine (unlike The Beach Boys song lyrics, which mention "a flathead mill") with a newer 344-cid Olds V-8 built and installed by Bill Wanderer. He then added Olds parts to the driveline, including a Hydra-Matic transmission and a chromed 1955 rear end.

The "A Brothers" go to work on the Coupe.
Much of the original customizing work, including the stacked headlights, side trim, and front grille was done by an auto shop owned by Mike and Larry Alexander in the Detroit suburb of Southfield.

The "A Brothers" sectioned and channeled the body, added a quad headlight fiberglass nose, made a special rolled rear pan, altered the frame, and covered the cobbled frame rails with polished aluminum fins.

When the blue lacquer paint was added Chili called the hot rod the Silver Sapphire.

On to California and the Famed
Barris Kustom Shop.

When Catallo was 18 he moved to Southern California and took a job sweeping floors at George Barris' Kustom shop in Lynwood, California.
This is the shop where the famed "Ala Kart" was built. It was the first custom-built pickup to combine both hot rod and custom elements, and was named "America's Most Beautiful Roadster" in 1958 and again in 1959. Chili knew he was in the right hands.
Catallo traded his labor to have the crew there tear down the hot rod, chop the top and repaint it. By 1961, the car was an all out show rod.
Special side note: The famous auto customizer, George Barris, died on November 15, 2015. He was 89.
The Hod Rod Magazine Cover &
The Beach Boys Album Cover. 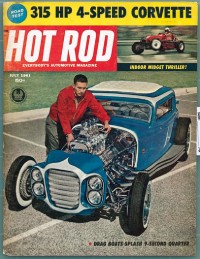 By campaigning the coupe on the West Coast show circuit, Chili caught the attention of Hot Rod Magazine, and the car appeared on the July 1961 cover.
Its greatest fame, however, came in 1963, when it appeared on the cover of the Beach Boys' album "Little Deuce Coupe."
Chili sold the car in 1965 and the car went through some major changes over the next several years. When Chili's son, Curt, saw it at a Detroit custom car show in 1997, he convinced Chili to buy the car back.
The '32 coupe would be the first and last car Chili would own.
Chili and Curt began restoring the coupe to the way it looked in the Hot Rod shoot that was used for the Beach Boys album cover.

Unfortunately, Chili passed away before the Hot Rod was returned to its glory days. Curt continued enlisting the help of many of the men who originally worked on the car, as well as General Motors.

Recognizing the blown Olds engine was a significant part of the company's history, GM helped Curt with the engine and drivetrain rebuild. The restored car appeared at the 50th Detroit Autorama in 2002.

In an interview in 2009 Curt said "The coupe was the first and last car my dad purchased."

After many changes, the "Little Deuce Coupe" now looks like it did when The Beach Boys made it one of the most famous cars in Hot Rod history. 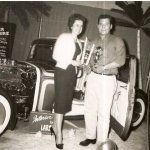