Staff member
#1
From Roadsters.com:
Boyce Asquith built the meanest and wildest Deuce roadster of all time back in the late Eighties. A blown big block, huge slicks, a funny car-style roll cage, lift-off body panels, and a louvered deck lid were some of the elements of this outstanding, screaming-yellow monster. It had wheelie bars, and they got used.

The first picture above, showing Boyce preparing for a pass, is a photo I took of page 32 of Pat Ganahl's book, Hot Rods and Cool Customs.

The second picture above, showing the car parked, was taken by Sherm Porter, and its backround was removed by Greg Spradlin.

After cancer took Boyce away from us, the Boyce Asquith roadster found a good home. In the third picture, the car's current and very appreciative owner, Dave Allen, is shown standing beside the car. Dave drives the car about 7,000 miles a year.

Boyce built his roadster so it could be converted between street and strip trim. The engine is streetable, the chrome-plated roll cage unbolts, and the Lexan windshield can be replaced with a chopped, stock-style piece.

The wheelbase was stretched three inches over stock, to 109 inches. To work on the chassis, the body can be unbolted and lifted off.

The car was featured in Rod & Custom in 1989 or 1990, both on the cover and in a color feature that showed just how trick it was. 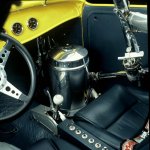 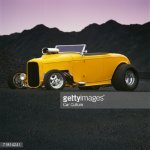