#1
The Nickel Car – A Great American Hot Rod
February 19, 2015 By Mike Gulett
If you are American you probably either own, or have owned, admire or want a Hot Rod. If you are not American then you may or may not like Hot Rods unless you are Swedish. For some reason the Swedes love American cars and Hot Rods.

I fall into the category of “admire or want a Hot Rod”. I have never owned one. Here is a very special ’32 Ford Hot Rod that I photographed in 2011 and 2012 that could motivate just about anyone to want a Hot Rod. The DuVall windshield is what I noticed first about this beautiful Hot Rod. Most Hot Rods have a fairly flat single piece of glass for the windshield.

The DuVall windshield is split in the middle with each side sweeping back with metal in the middle holding the two pieces of glass together. In the case here the metal is nickel-plated. This Hot Rod was built in the 1990s by Bob Morris who used an original steel Deuce body and installed an Allen Jennings built 320 cid Ford Indy block with Gurney-Eagle heads and four downdraft Weber carburetors connected to a custom manifold. The headers were built by Mike Hamm. The three piece hood and the beautiful and unusual aluminum top were made by Steve Davis. Allen Jennings hand built the Indy-style gas filler car and he also performed much of the detail work including the hand made dash and the pedals. The chassis work was done by Pete (“P-Wood”) Eastwood of Pasadena, California.

This Hot Rod was painted by Don Thelen’s Buffalo Motor Cars, Ron Mangus handled the green leather interior and Ron Covell did some of the custom body work. The Nickel Car gets its name from the liberal use of nickel-plated trim which matches the Halibrand Bonneville wheels. I notice the wheels that are on the car now are different than the wheels on the Rod & Custom magazine cover and in the book mentioned below. They are now black instead of silver. The Nickel Car is one of “The 75: The Most Significant ’32 Ford Hot Rods” featured in the excellent book ’32 Ford Deuce: The Official 75th Anniversary Edition This car was formerly owned by the comedian Tim Allen and is now owned by Bruce Meyer who showed it to me and shared its history. Unfortunately I could not remember everything he said so I had to read the book. The Winged Emblem Is Made Of Solid Silver

Originally built in 1993 for Bob Morris, Santa Barbara, California, by Don Thelen’s Buffalo Motorcars, Paramount, California, the roadster was featured in TRJ number 61. Freshened up by last year’s AMBR winner Hollywood Hot Rods in Burbank, California, it is a unique circumstance that the roadster has never been in judged competition, yet is considered one of the most impressive builds of the 1990s. The Gurney-Weslake heads on the Ford small block are a rare feature, with the 48IDA Webers and Ford Top Loader 4-speed trans rounding out the powertrain. Pete Eastwood built the chassis from original rails, and the original 1932 body was modified by Steve Davis before paint from John Carambia. Davis also created the aluminum lift-off top and hood, with Ron Covell creating the aluminum rolled rear pan. Ron Mangus made the green leather interior 25 years ago, and it’s holding up quite well for a car that has seen thousands of miles. The lightening-holed and nickel-plated components, made by Allen Jennings, are why this car has become notorious as the Nickel Roadster. Can a 25-year old car win the AMBR? It could happen. 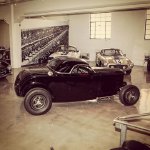