Under the hood of the Berardini Bros 1932 Ford was a Flathead V8 so dominant on the 1/4 mile drag strips of the LA-area in the 1950s that the very sound of it would strike fear into the hearts of its competitors.

Pat and Tony Berardini won the Gas and Fuel Street Roadster Championships from 1950 to 1955, setting countless track records. Pat drove the car you see here, a ’32 Ford (colloquially known as a Deuce) fitted with a 314 cubic inch Ford Flathead V8 with a 4-carburetor Edelbrock intake, Harrell high-compression heads, and a Harman and Collins magneto.

The Berardini Brothers had bored the engine out to 3-3/8 inches, and it was fitted with a handmade billet crank, stroked 5/8ths of an inch to 4-3/8ths.


The pinstripe finishing touches were put on the car by Kenneth Howard, better known as Von Dutch, once his paint was dry the car was ready to race.​
The car was nicknamed the “404” as a reference to its Iskenderian 404 racing camshaft. The cam was developed by Ed Iskenderian to match the radical cam profile that Ed Winfield had designed for the twin-cam Offenhauser racing engine, the lift was actually .400, but Ed decided that “404” sounded better so he ran with it.

Due to the high valve lift and long duration the cams were entirely unsuitable for road use as the engines would barely idle, but on the race track they were unstoppable. 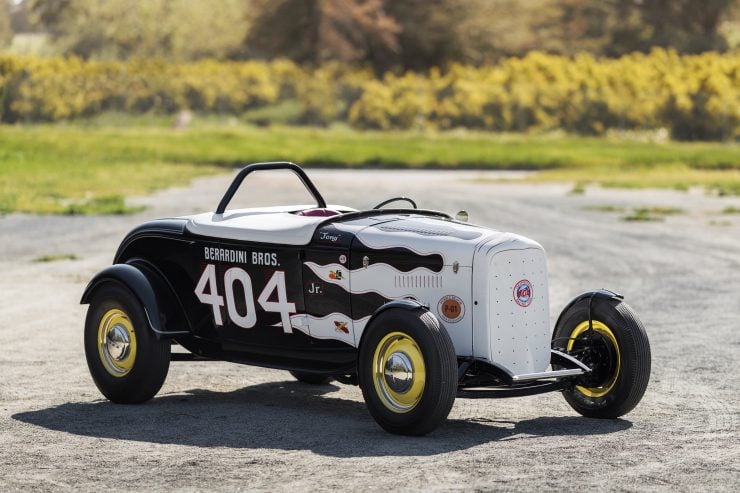 In full race trim the the Berardini Bros 1932 Ford was reliably capable of low 12 second passes, when discussing their performances Pat said “We started winning over 80 percent of the races, with that 404 cam, we were pretty consistent. We had low-end power and our mid-range and top end were enough to hold ’em off. One time, at Bakersfield, Tony’s car was apart, so he stripped the fenders off my ’32, and won the gas roadster class.”

So famous was the car in LA that it had a cameo appearance in the 1954 Glenn Ford/Ann Francis/Sydney Poitier classic, Blackboard Jungle. The car appears with one other where two street racers chase down on Francis and Ford, who only barely escape.

In 1955 the Berardini Bros sold their championship winning car on after 6 years of consistent success, it passed into the hands of Jeano LaCoste from the San Francisco “Pacers” club – who kept racing it and even managed to lower the 1/4 mile time to 11.75 seconds. 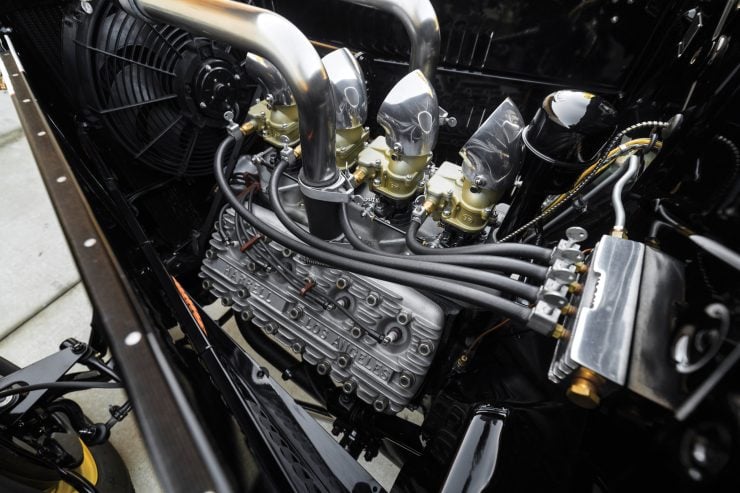 As is often the case with racing cars, the Berardini Bros 1932 Ford 404 Jr. passed through multiple hands over its life and much of it was changed – but in 2004 the car was seen at the Grand National Roadster Show by Roger Morrison, who decided he wanted to restore it back to its original specification.

The car was shipped to Dave Crouse in Loveland, Colorado who began a full frame-off restoration, after studying videos and photos of the car racing in-period. The original frame was sourced, with as many other original parts as possible, a new Flathead V8 was sourced and built to the exact specification of the original, and amazingly Ed Iskenderian still had one last 404 camshaft and lifters on the shelf which he supplied to ensure that the car would run properly.

The full restoration took two years, and the launch party at the NHRA Museum included one very special guest – Pat Berardini. Pat climbed into the car a little more slowly than he used to in the early ’50s, and he fired it up. The wildly unsteady sound of the Flathead with its 404 cam idling brought back a flood of memories and he couldn’t resist giving the throttle a few pokes to really bring the engine to life.

In the years since the car has won its class at the illustrious Pebble Beach Concours d’Elegance (2007) where Edsel Ford presented the car with Pat Berardini riding shotgun. Today the car is considered one of the most important and influential ’32 Ford hot rods of all time, and for the first time in a long time it’s coming up for open auction.

If you’d like to read more about the car or register to bid you can click here to visit the listing on RM Sotheby’s. 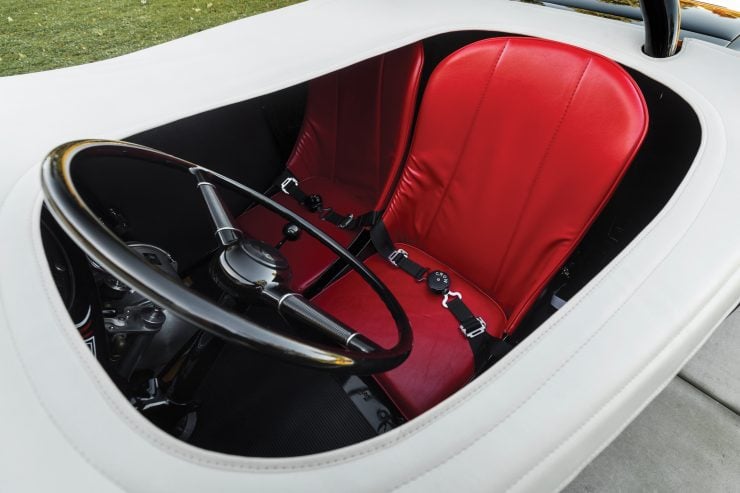 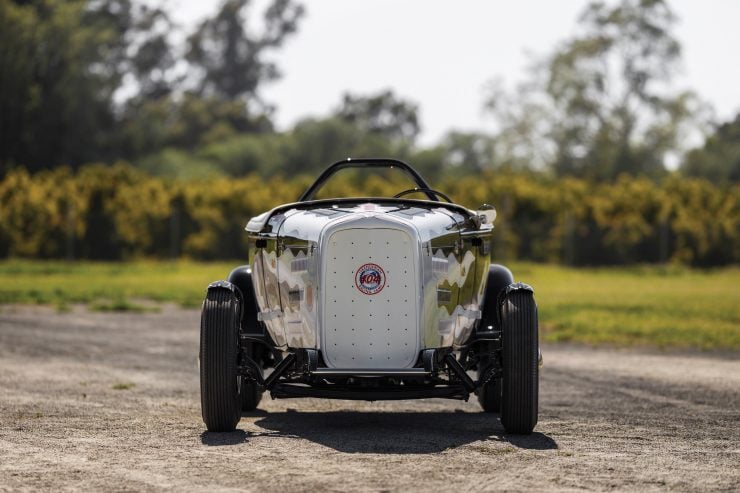 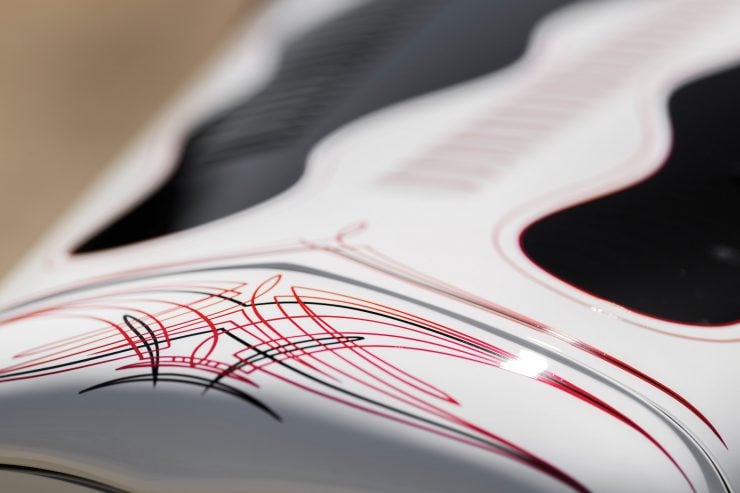 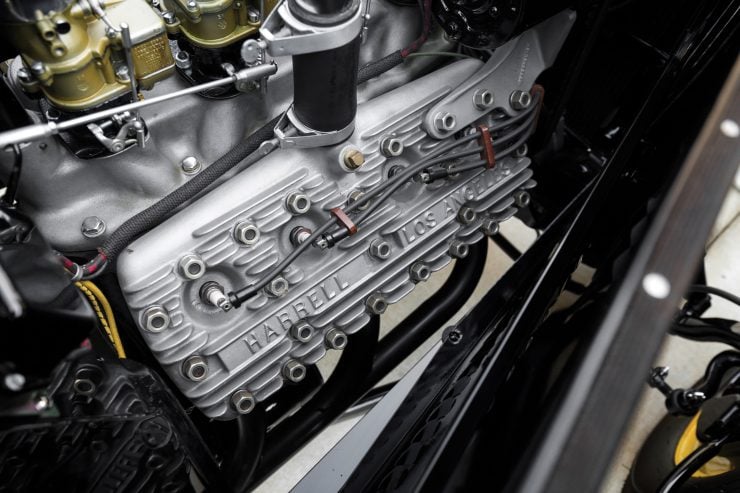 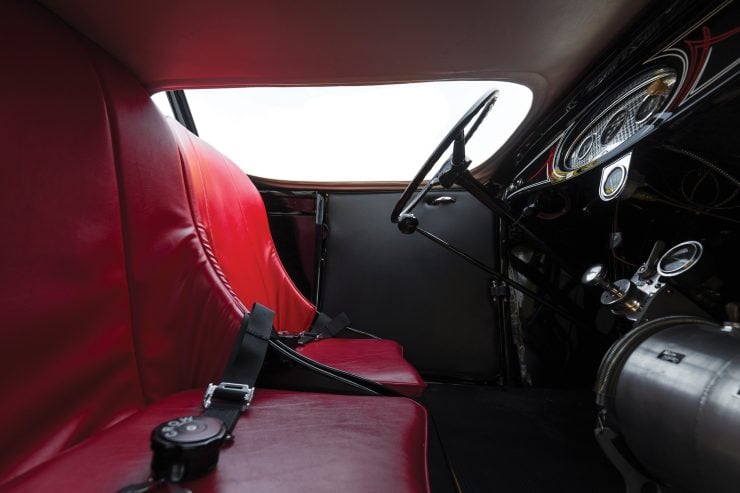 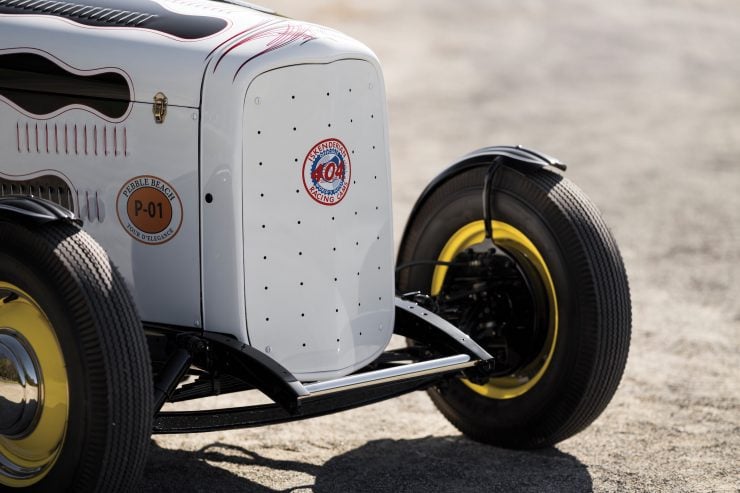 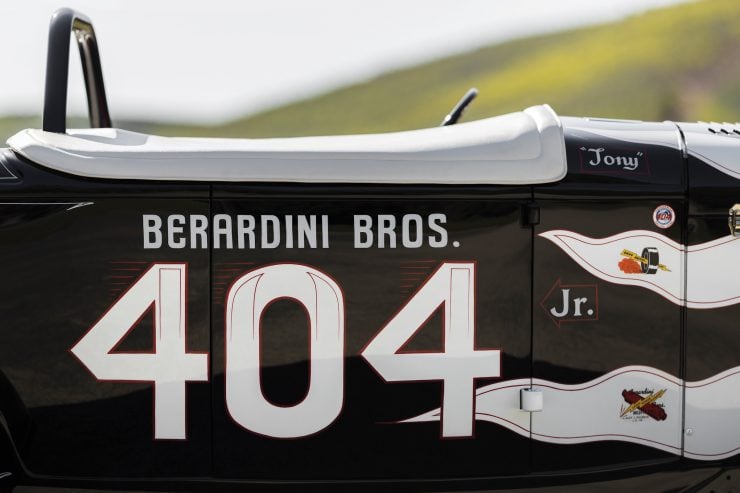 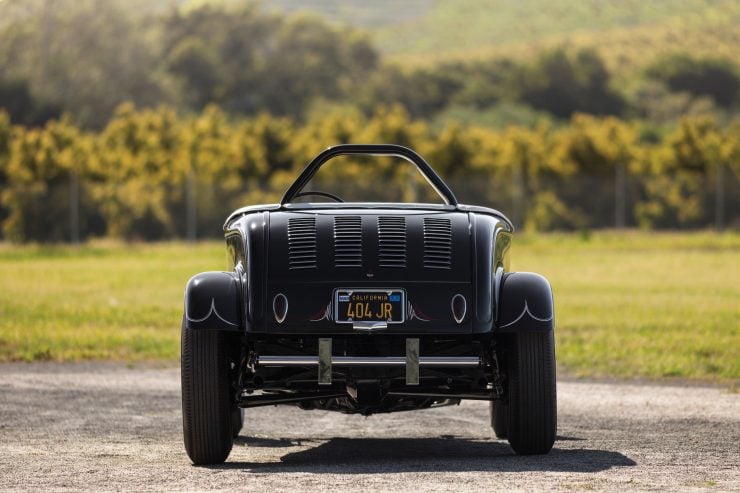 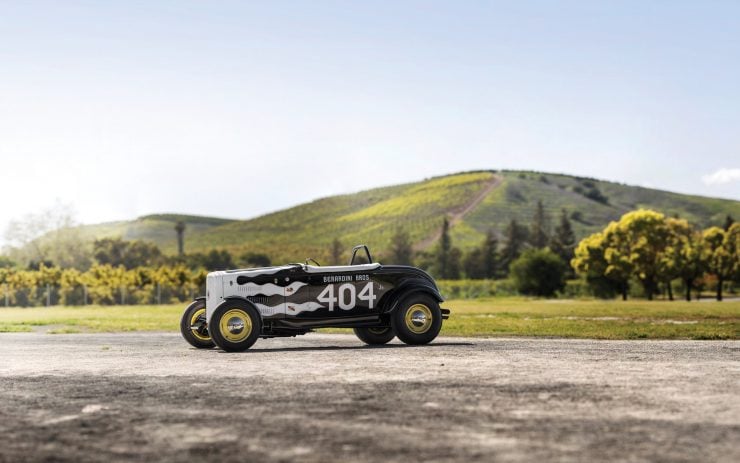 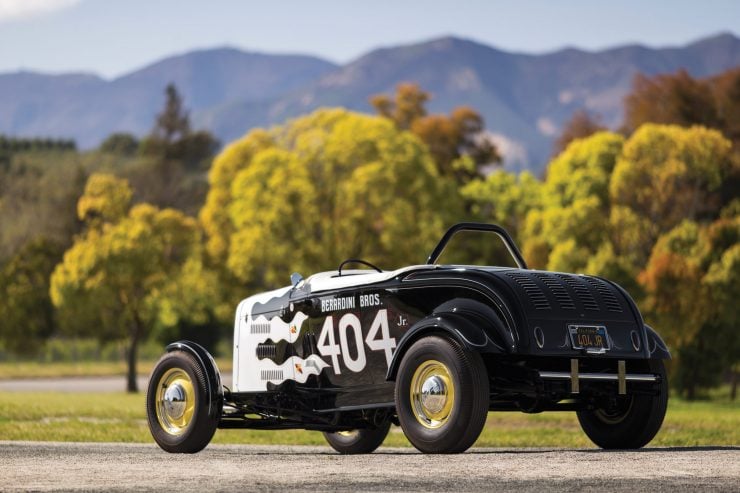 #2
Berardini Bros.
There are many kinds of reunions, but one involving a '32 Ford roadster, its current owner and its former owners are quite different. This story starts in 1950, when the Berardini Bros. (Pat, born on August 31st, 1927, and Tony), took Pat’s’32 (#404) Ford, and Tony’s ’29 (#7) Ford, to the Santa Ana Drag Strip. Both cars had very hopped up engines. When the last flag came down in 1955 for the Berardini Bros. Racing Team, both cars had won hundreds of races and had set many drag strip records. They were top in their respective classes and they were the very first, over–all points champions, including the gas AND fuel classes, at the Drag Racers, Inc. Awards Banquet, in 1954. They achieved recognition from racers and fans alike. Not only were the ’32 and ’29 fast, but they caught the eyes of fans, as two beautiful racing hot rods.

In late 1954, because of its black paint with white flames, the “404” was chosen for a small part in the motion picture, Blackboard Jungle, starring Glenn Ford, Anne Francis and Sidney Poitier. The black-and-white-classic film was set to Bill Haley and His Comet’s, “Rock Around The Clock”. The ’32 was sold in July of 1955 to Jeano LaCoste for $975.00. Under his new ownership, Jeano watched the “404” blast by the Gas Roadster record by the Berardini Bros. Racing team. For years Jeano hardly changed a thing on the ’32, and even kept the name “404” alive. (Side note: The “404” is a racing cam, built by Ed Iskenderian, which helped give the ’32 its incredible speed.) The “404” continued winning and breaking records, at many of the Northern California drag strips.

The “404’s” racing legend, gained the title of, “The Racing Man’s Deuce”. In the early ‘60’s, Jeano put a blown Chrysler in the “404”, and it put Jeano into the winners circle many times. He held the World’s Record in A/Street Roadster class at 136.36MPH. The “404” was then sold in the late ‘60’s to Rudy Perez for $1000 dollars. Rudy was now the proud owner of the “404”. Gone were the black-with- white flames of the Berardini Bros. Racing Team. It was painted a bright yellow and the “404” became a street rod. Rudy took the blown Chrysler out and dropped in a Corvette engine. Rudy changed a few things, but he kept the number “404 Jr” (Jr was for Pat's son) alive by putting the number on the license plates. Now the “404 Jr” was not only a street rod, but a show car as well. Unlike many other show cars, Rudy drove the “404 Jr” cross-country to each show and he took home many awards for the “404’s” beauty.

In 2003, at the Grand National Roadster Show in San Mateo, California, Rudy won the Brizio Family Award, as the Best Street Driven Hot Rod. Like previous owners, Rudy had kept the “404 Jr” in great shape and felt it was time to reunite the car with one of its original builders... Pat Berardini. It has been some 50 years, and many miles since Pat had seen his old roadster. Rudy drove the “404” down from his home near San Francisco to Southern California and the Reunion took place in Garden Grove at Pat’s home. Pat had never met Rudy, but both had the love of the “404”. Pat had not ridden in the “404” since he sold it. Now, here he was taking a ride with Rudy. Once a hot rodder, always a hot rodder! Hours were spent in the language of drag racing and hot rods. The past began to come alive, as white flames on a black ’32 roadster rekindled their memories. For Pat, seeing the “404” was more than seeing an old friend. It was a passion in steel.

The “404” has had some kind of an awesome history, but it was only going to get better! And did it ever! In October of 2003, the Berardini Bros. Racing Team was honored with the first ever NHRA 12th Annual California Hot Rod Reunion’s, Golden Age Award, at the drag races in Bakersfield, California. Pat and Tony were given the award for their dedication, innovations, and achievements during the infancy of organized drag racing. Rudy had vowed that he would never sell the “404”. He had owned it for 37 years and had driven “404”, nearly 200,000 miles. But, one day in January 2004, at the Grand National Roadster Show in Pomona, along came an offer Rudy could not refuse. Roger Morrison, an avid car collector from Salina, Kansas, was looking for an original hot rod of the early 1950’s to restore. And what better car could have had more history than the “404”. Rudy sold his beloved roadster so that its history would be preserved. Roger would restore it, to its former racing glory of the early pioneer days, when the Berardini Bros. Racing Team owned it. It was a “win-win” situation. Dave Crouse and his talented crew from Loveland, Colorado worked overtime to get the roadster completed for the 2005 Grand National Roadster Show. Roger interviewed and filmed Pat at his home, for several hours. He wanted to know every detail about the “404”, and how Pat and Tony came to race two of the coolest looking and hopped up roadsters of their time. Yes! This story is certainly not over yet.

The “404” restoration won the prestigious Bruce Meyer Preservation Award acknowledging the extraordinary job done by Dave Crouse’s Custom Auto Crew. Roger gave Pat Berardini, Jeano LaCoste and Rudy Perez one heck of an unveiling and reception at the Wally Parks NHRA Motorsports Museum on January 19th, 2005, almost one year to the day after he bought the “404” in 2004. There were several hundred people attending, with old friends, new friends, family, photographers and journalist, who came to see what a world class restoration looks like. No one was disappointed! Jeano and Rudy made the night come full circle, as they are the two men who helped make the history of “404” complete. The “404” was driven, by Roger, from the Grand National Roadster Show, on January 23rd, 2005 into the Wally Parks NHRA Motorsports Museum. It stayed thru-out the NHRA Winternationals drag races. Afterwards it resided for several months between the Wally Parks NHRA Museum, and the Petersen Automotive Museum in Los Angeles. In October it was taken to the 14th Annual California Hot Rod Reunion in Bakersfield, CA where it was on display in the lobby of the host Double Tree Hotel. The highlight of the weekend was when Blackie Gejeian asked Roger Morrison to show the “404” at his annual Autorama in March 2006. An honor indeed!

The “404” was featured in the celebrated 32nd edition of The Rodder’s Journal. And the fun wasn’t over yet…at the 2007 GNRS, the “404” was chosen by the Ford Motor Company to be one of seventy-five hand selected ‘32’s to commemorate Fords 75th Anniversary of the '32 Ford and the Ford flathead engine. The "75” Most Influential ’32 Ford Hot Rods were selected by a blue-ribbon panel of automotive authorities across a variety of fields. The panel included members from around the world, and represented all facets of hot rodding. The journey for the "404 Jr" commenced at Pebble Beach, Concours d'Elegance (August 19, 2007) where it was honored with the prestigious Dean Batchelor Award for the most significant hot rod.
From American Hot Rod Foundation.

#7
When Jeano LaCoste from San Francisco owned it.