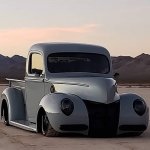 #193
1939 Full Kustom Coupe Connoisseur’s Custom AKA The McNutt Coupe
This car was started in 1958 with a complete 57 Chevy Power Pack 283 (like an LS today)
It had a 47 Ford 3 speed but now has a 700R but still has clutch pedal and looks the same as it did with standard tranny. It still has a Banjo rear end but now open drive shaft. It has all new 40 Ford drum brakes including new drums.
The car has been chopped, sectioned, 47 Lincoln rear fenders, 59 Chevy headlights, full Custom Grill. The color is a 57 Studebaker factory color. I have the interior door panels & seat cover skins from 1962. It just looked too tired for a fresh build.
This car had AC installed in 1959 (even some new Cadillac’s didn’t have AC in 59)
The gentleman Bob McNutt that built the car was 6’-2” and he drove it to most shows back in the day. I’m 5’-6” and it’s right for me. The car is a Blast to drive & Show.
It was in 12 magazines including front cover & full spread in 63.
It won over 40 1st place trophies including Best Custom 1958 NHRA Detroit, MI
I’ve got tons of information & photos of it’s History.
It was just featured in Rod & Kulture Magazine by Trent Sherrill. It’s been in Rodders Journal as well.
It won a Top Award @ Lone Star Roundup picked by famous Jeff Norwell. It won Best Custom at The Invasion in Dallas.
It was at The Customs Then & Now 2011 at Grand National Roadster Show 2011.

#195
Not a good day! Left rear tire blew and pieces of the tire tore the fuel inlet to the tank off, sparks from the steel rim on the
pavement ignited the gas. Two hand held fire extinguishers (someone. stopped to help owner) could not get the fire out.
Very scary! Took the fire department to get it out. I heard a rumor that it was going to be rebuilt.

#196
That looks horrible, hope no one was hurt.

Staff member
#197
That's too bad. It will take a lot to rebuild it.

#198
that is a sad one.....can't imagine rebuilding that. the roof must be heat treated

#199
Am I the only one building a convertible sedan?

#200
Really miss my friend Dal Middleton (RIP), and this fine ride of his. This car made many cross continent trips over the years. It was on the TRJ Topless tour, featured in issue 8, when it was turquoise.